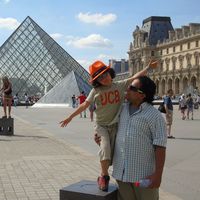 To educate my son very well and grow him up with the hospitality spirit and sharing.

Even i'm not good in describing myself... a very open-minded, down to earth and very helpfull, but it's up to you to judge me.....

اعمل لدنياك كأنك تعيش أبدا و اعمل لآخرتك كأنك تموت غدا This saying is in arabic, and can be translated like this: Live your life as you will never die and think about hereafter as you'll die tomorrow.
The meaning is to live your day to the full and never say tomorrow, this is my philosphy

Helping others is in my culture, i can show around, give advices, try to understand others and give them a chance to get to know me deeply.

Art, msuic, photography , arabic calligraphy, martial arts , cooking, jogging and hanging out with my beloved son Rayhan and friends too. camping and hitchhiking.

Little house on the prairie ,Dances with wolves, prison break.
Gnawa music, and all kinds of music in morocco and the world, i listen to any kind of it will depend on the mood i'm in.
Good books...

In 2010, during the economic crisis , i was in spain and i was obliged to camp for three months in the forest. And there i've hosted people from Hc and CS, from austria, belgium, south korea, usa.
Even i was in a bad situation , nobody wanted to host me, i don't know why, but i was hosted just by moroccans in my country. In europe , still dream to be hosted to believe in hospitality ...

I can teach anyone interested in arabic calligraphy or even the language or the moroccan dialect .
I do like learning new languages and improving those i'm learning, i think that languages are the windows to make people be more open to other cultures.

Everything: first thing is trust and mutual respect, then friendship, food and my total hospitality....