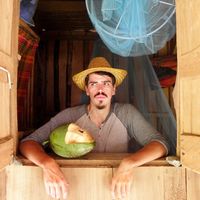 I was born and raised in Spain, that country under France, where people run in front of bulls and eat Paella while taking a siesta. Yes, WHILE taking a siesta. I have an incredibly active sense of humor (which doesn't always mean I'm funny) and a rare ability to tolerate the idiocy of society and still manage to keep my rage in a down low status. If I were to choose a few words that generally described me, I would have to say that I am rare, eclectic, erratic and eccentric, agnostic, athletic, anomalistic and amusing, truculent and tranquil, peaceful and pessimistic. I am gifted with gab and bagged with drift, politically, anatomically and ecologically incorrect, liberal and liberated, new wave but old school, interactive, hyperactive and sometimes even radioactive. A sterling gift of undaunted artisticness and a consuming desire for carelessness; you shan't bother to ask, I've never been to Loch Ness. I may be skilled in the arts of math but I hate their guts with uncanny wrath. I support animal rights and once or twice I've hugged a tree, thus I find nothing admirable in a killing spree.
Therein lies a Holy Trinity of Couch Surfing (Easy Going, Open Mindedness and Wanderlust Galore)that plagues like a cliché these vast realms of surfers, so please, let's keep calm and move along to something less generic and uncreative.

"A thousand mile journey begins with a single step"
- Lao-Tze

I will show anyone who wishes around the beautiful city of Sevilla as well as the surrounding towns.
I will provide company, drink a beer or a tinto de verano with whomever is lost (intentionally or not), I will help newcomers with anything I can and basically I will provide, for anyone who might want it, a friend.

It has been a great surprise and a huge source of happiness to finally experience CS firsthand, it has been amazing knowing people and now I don´t want to stop. It fulfills me a bit more that great people like this still walk the earth. Faith in humanity slowly restoring...

I could summarize my many interests in two main paradigms: I'm interested in everything that humanity, the earth and the universe have created. Once I achieve that, I am interested in how it all works. Scientist? Come on over and show me something bubbly and tell me what it does. Writer? Tell me a story. Lost in the world without no clear knowledge of your passions or direction in life? Here, have a beer and sit next to me in the crackling light of the fire as we gaze into the infinite vastness of our possibilities.

Humans created art, and as such I can never deny or turn down any art form. It's stories that amaze me, so be it in traditional forms like books or the spoken word, I always appreciate a good story. Music tells stories, books tell stories, movies tell stories, heck! cooking tells stories. The pleasure of creating something out of nothing is such an awesome concept that I see no better gift than something new, something truly new.

Being born is statistically amazing, although 100% of everyone here already has accomplished that as well... and then, many years later, I got lost (the unintentional kind) in NY City for a whole day...and loved every minute of it.

I have created many things on the way, which is pretty amazing to me if you haven't noticed already.

Unfortunately, I am not the daring adventurer most handsome chaps seem to be 'round this here lands, I've usually played it safe for better or worse, so don't expect crazy life/death situations on my part.

Knowledge knows no boundaries, right? The unlimited potential of the brain baffles me quite. If I can leave an encounter with just one new thing in my mind, some trivial fact, some unfunny joke, some pearl of wisdomless gab...imagine the possibilities.

I can offer myself, what more could you possibly want?