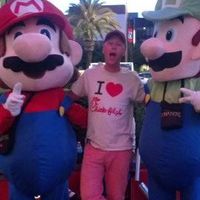 -Also to keep my references FACEbook FREE, amazing, meaningful and my number of friends low out respecting actually considering those people "FRIENDS".

-So PLEASE WRITE ME A VERY WELL THOUGHT OUT REFERENCE not a FRIEND request as I will appreciate that much MORE unless I truly consider you a friend whom I've known for more than 3 days/hours.

-Lastly and thirdly I try to take a little piece of everywhere I go WITH me as I travel this planet we live on and to HAVE FUN!!
Sincerely, Danny B. =)

Just basically a PuNk RoCkEr and a skateboarder who has a lust for life that's pretty unmatched when it comes to most here in the States. I not only think outside the box I LIVE outside of it and realize after traveling so much that America is great especially where I'm from. So visiting other places while I do my thing here is what I wanna do. I started a little tour company after realizing I'm pretty good at it since I can't host at the moment so if your interested feel free to check it out:
http://dannyswalkingtours.weebly.com/

I'm nicer than nice as you can read from most of my 360+ references butt you can't get along with everyone no matter how hard you try?

I don't do things for $ I do things FOR FUN butt I figured if I'm going to show people ALL over the city I might as well make it worth my time? So pleasant dreams CSr's and Thanx for listening.
Sincerely,
Danny B. =)

Even though I don't know anything about Bukowski or Karuoac I keep getting compared to them by all these European's I am hosting so I will make up this philosophical thing based on that: Write like Keruoac and LIVE LIKE BUKOWSKI? =)

I LITERALLY used to spend about a half a month out of every month of my L.A. life showing people all over that city, (If I liked them that is=) and I think that's quite a bit more than most because I had a work when I want to schedule and it brought ME joy to bring OTHERs the joy of experiencing what I did in that city full of hidden secret's so many year's ago. So take THAT! Ha-ha. =)

A lot mostly in 52 something countries and over 100 something cities or small villages in Europe and counting and a few in the states.

Primarily music is my life even if it's not PuNk RoCk cuz I'm open minded but it's one of my only reason's for getting up in the morning. I have also been interested in skateboarding since before it was cool like a decade ago when it used to be rebellious and something for outcasts. I also like riding roller coasters, playing video games when the weather sux outside, swimming in the ocean and conquering the planet ONE continent at a TIME!

The one movie I could really relate to out of many growing up was a movie called, "KIDS" It was all about being young and feeling invincible and wanting to take on the world which is how I feel almost everyday. It was when skateboarding was skateboarding and Punx were Punx and when nobody had a care in the world as long as they were with they're friends that's all that mattered. The sense of unity of a lost generation of KIDS with no future and the fact that it was O.K. because they didn't care about tomorrow only what was happening right here right now. I also like tons of gangster movies and tons of little kid fantasy movies!

As far as music goes one of my favorite bands in the whole entire world is a band from Chicago, Illinois called "Screeching Weasel" Other than that there are way too many to even begin to mention because like I said earlier music is my life and my obsession and usually comes first before anything else. When I was young there were the people who went the "Sex Pistols" route or the "New York Dolls" route and that pretty much defined what kind of PuNk RoCk you would listen to for the rest of your days. I chose the "SeX PiStOlS" because it better matched my personality and mindset and ironically I have never seen them play but I did see the Dolls for free!

Don't read a whole lot of books because I am so preoccupied with all the wonderful free weekly publications put out by the City of Los Angeles. All the other stuff comes from the Screen Actor's Guild and I usually never have any time for that even because I am so busy living life instead of reading, watching or typing it. I did read something though my aunt left behind in a box before I moved from Iowa to out here by an author called "Jack Ketchum" and the book is from the 70's and it's called "Off Season" It was graphically Gruesome and violent for no real reason and I thought it was so amazing I couldn't put it down. Man there must have been some good drugs going around in the 70's, what happened?=(

Outta respect for my Couch Surfer that won the very prestigious, "Couch Surfer of The Year Award" 2010 He recommended that I say that one time I won an Ice Cream Eating Competition 10 minutes after winning a Hot Dog eating Competition. There ya go William thanx for being awesome.
Sincerely,
Danny B. =)

The proving WRONG of the rumors that there is NOthing to see and do here in L.A. and that you need a car to SEE or DO ANYthing!? =)