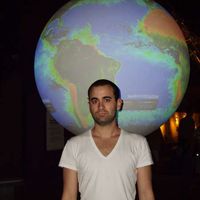 I merge with the future

I have nice eyebrows.

If it's fucked up enough, it might get somewhere.

I go to meetings and events, and host

I like music and film very much. I like documentaries and the peculiar things in foreign cultures. Peculiar is subjective.
I want to trust people because it feels good, so I'm looking for nice excuses to do it. I'm a good guy and meeting cool people really does it for me.
I love parks, forests, lakes, animals, I love jokes and funny stories.
I spend my time making films or editing in my computer, I have a band, and I work as cameraman, editor, and scriptwriter.
I like geckos, dinosaurs, pirates, green, pizza, roller blading, monkeys, good thriller movies, inflated rubber gloves, cats, foxes, ginger people, Salma Hayek, Beavis and Butthead, brownies, alternative music, hiking, swimming, chocolate, indian stuff.

Last year I went to Oxford, because it's where Radiohead is from, and it's a tiny city with many universities and Lewis Carrolls house, haunted castles and nice people. i had been thinking about that town for years and when i saw it was very inspiring.
I once went to a poor neighborhood that was going to be evicted, about 50 families to the streets, and a bunch of people made a human chord around the block and faced the cops. Many were beaten and put in jail, and the families were put in a cultural centre for several months. It was probably the most intense moment i've lived.

With my feet upon the ground
I lose myself between the sounds
and open wide to suck it in
I feel it move across my skin.
I'm reaching up and reaching out,
I'm reaching for the random or
what ever will bewilder me.
And following our will and wind we may just go where no one's been, we'll ride the spiral to the end and may just go where no one's been.
Spiral out, keep going, going.