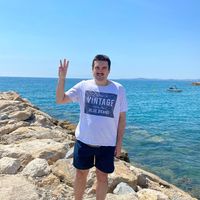 I have lots of interests.
When I was a child I was dreaming of becoming an opera singer.
Later in my teens I changed my mind and was going to become a rock singer or metal frontman.
Also I dreamed of becoming a super scientist to invent some break-through in science.
I still like scientific fantastic books and movies but I am working in IT as Salesforce Development Team Lead.

Currently I am Salesforce Development Team Lead.
In the past I was teaching Calculus (Mathematical Analysis) at University when I was postgraduate student.
Could teach Ukrainian, English.

I think I can show Lviv if I have time.
Also I can perform some home concert.
Also I can teach how to solve the Rubik's cube.