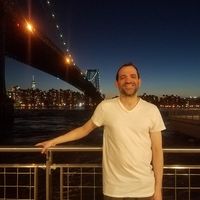 To find the truth about Santa Clause.....

Been living in Boston for 10 years and love the city for its architecture and history. After being in Miami for 3 years moved to Boston back in 2004. I work in Real Estate and pursuing a career in Commercial Real Estate.

I have hosted several times and have surfed a bit. I also attend some of the weekly CS'ing events and special events including the picnic on Boston Common in October. More recently I have attended and hosted coffee socials around Boston to bring together surfers and hosts to connect and share experiences and resources for a few afternoon over delicious coffee.

I have hosted before which has worked out great, have attended local couch surfing events and looking forward to surfing myself in the near future. I know how to get around the city and about the different neighborhoods better than most people and my reviews will tell that.

I love to travel and visit Ireland twice a year. My hobbies including history, genealogy, museums, art, sports, music, live concerts, night life, dancing, ocean, socializing and much more. I am a big fan of Boston and spend much time in the city and know all the areas and how to get around them.

Movies - Pulp Fiction, Fight Club, The Wind That Shakes the Barley, Borat, In the Name of the Father, Hedwig and the Angry Inch, Super Bad, Old School, There Will Be Blood and much more.

Found my long lost family after 100 years of separation in Northern Ireland in 2005.

Boston is a wonderful city full of so much history that can be seen everyday through the landscape and archtecture of our buildings, alone. There is also so much culture in this small city. I am interested in meeting people who can share their own local history of places they are from like Russia, Ireland or other parts of America like the south or west coast.