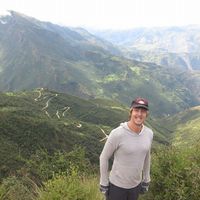 Stocking up on good karma!

I caught the travel bug! Symptoms include, spontaneous adventures, itchy feet and an unquenchable thirst for life! :)

I work as a cameraman, filming documentaries on everything from olive oil to mole catchers!

The world is a book, people who choose not to travel, only read one page!

Off to South America next year and plan to use this as much as possible, so it's only right I build up some credit by helping others out before I leave!

I'm a seasoned traveller but when it comes to Couchsurfing I'm very much a newbie!

Raced a Tuk-Tuk decked out as a ferrari, 3000km across India for charity!