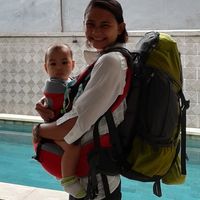 No offense but i DONT accept friend request from people who i havent met for real. Sorry

"work hard, travel harder". a solo traveler who fall in love with traveling since a long time ago. but finally got a chance having my first trip abroad in 2009 when i got my own money. and since then i'm working so hard earning money and buy flight tickets then start to explore the other side of this world.

*Never be afraid to go as a solo traveler. Cause in the end, you'll never be alone.

*A simple thank you and a smile from you sometimes could change people's bad mood into a good one.

*Think what you can do the best today &amp; enjoy every seconds of it. What if tomorrow never comes?

*"You just have to do it!" - whether you are sure or unsure about something, just do it!! and you'll find out.

to hear YOUR stories of travel

1. Hiked Baby Krakatoa in Sept 2011
2. Hitch Hiked in Phuket in Jan 2012. I thought its gonna be hard to hitch hike in Asia :D
3. COUCHSURFING! where i have met amazing people from around the world.

Teach: Bahasa Indonesia, some of TV productions
Learn: Anything esp. other languages
Share: some traveling experiences, some life experiences