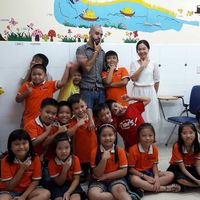 Keeping the slow travel mindset, I started an overland trip from Singapore to Portugal in 2015, whenever I decide I resume it from the last location I've been: I made it to Northeast India so far. :)

Currently based in Thailand, trying to make sense of the world without worrying so much. Let's grab a coffee? :)

I've been traveling on and off for some years, set base in several incredible places, met countless amazing and unforgettable people and got *accidentally* hooked to traveling!

Learning. Learning about your country, your culture, yourself and the rest of the world!

Can't live without music! :| from classical to rock, jazz, blues, bossa nova and some electronic, I like most stuff depending on the situation (everything is better with music)!

I tend to be picky with movies and tv shows, but in the end all depends on the mood and the company. ;)

Taught myself how to play 9 instruments.
Crashed a music festival for 5 days, had free food, drinks, accommodation and access to all areas.
Performed on stage for over 1000 people audience.
Worked for Google during a summer.
Worked at CERN alongside with Nobel Prizes in physics in the biggest experiment in the world.
Fell in love.
Hitchhiked from Singapore to Thailand.
Stopped resembling my passport picture.
Worked as a SCUBA Divemaster, Rescue Diver and Emergency First Responder.
Stayed with and hosted awesome people on Couchsurfing, made friends for life.
Crossed Vietnam by bike with a tent on my back, camped in amazing remote villages alone with the locals.
Taught English to dozens of children while volunteering in a school.
Helped renovating a medieval tower from the 13th century in the south of France.
Crossed south of Europe, doing 3500km by Twingo.
Drove from Bangkok to Koh Phangan by motorbike, camping and staying with the locals on the way.
Hitchhiked Northeast India, walking with no direction and following whichever destination the locals took me.
Helped setting up a co-working and co-living space in the Japanese countryside.

I can teach you some musical instruments, graphic design, web development, scuba diving, etc! I'm happy to share about any of the cultures I've came across so far, we can play music together, go out for drinks or just chill in the couch like a potato! :)

Anything and everything! I can buy the first beer if you buy the second one. ^^