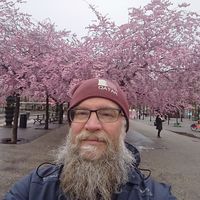 Surfers with +10 hostings will have priority.

Beer and Marathon and Curling as much as possible

A backpacker turning grey and now hitting an all time high age of 51 years. Like the idea of helping other budget travelers in their quests of seeing the world. Been using my 5 weeks of holiday for the last 20 years to travel to destinations not on the top 5 list of visiting spots by Swedes in general (in other words not Canary Island/some Thailand islands.., I do plan to visit those as well, sometime when I'm in my late 80's). A vegetarian (lacto-ovo) for the last 20 years. Living in the central part of Stockholm (Vasastan/Östermalm). Have had 2 job in my work career. Please click on the link below which will take you to Google calender to see when it is possible to couchsurf my place. A request on dates when I have stated that I'm occupied is a waste of your and my time.
https://calendar.google.com/calendar/embed?src=ehspegu%40gmail.com&amp;ctz=Europe%2FStockholm

My personal negative belief in things makes nearly everything I encounter to a positive thing. It can simple not be as bad as I think.

A tendency to do not what I being ask (especially when it comes from my parents).
Example:
1994, my mother told me I don't look good in a beard. I have had a beard since 1994 (and my mother still think I would look better without).

There's been occasions when I have been seen drinking and talking on Stockholm regular pubs or cafe's.

Have hosted 100+ people/couples (and counting) and they have all been great.

Have surfed during a week in Baden-Würtemberg in Germany at four different places (Baden-Baden, Freiburg, Heidelberg, Stuttgart) and it was a lovely expericence.

Have returned the favour to Jon in Norway and surfed at his place in Tromsö. It was a great time.

Have done some couchsurfing in South Korea and Japan and it was in many ways the highlights of a great trip.

Revisited surfers in Serbia and France. And was treated like the long-lost son returning.

Surfed in Indonesia and Uruguay and was told and showed things I would never known and seen if it was not for my local hosts.

Revisited and surfed my fastest running surfer in Jesusalem, Israel and learned:
1. About the best hummus and falafel places in Jerusalem.
2. A lot about Israel and Jerusalem in general.
3. How a good push last 2 km of a Marathon really helps you.

I'm an addicted runner who runs 2/3 times a week. Stockholm have some great parks for that (and Park Runs). With all training I have put into it I'm amazingly slow but I do have some endurance. When ask about it, I usually say "It takes a real man to finish last in a race, brush it off, and continue planning for the next race". I'm a real man.
In wintertime I gladly (if possible) skate and ski (countryside) in my surroundings. I also play curling with some friends. We have been doing that for the last 20 years. "You are not very good", is a direct quote from one of the 13 year old girls after her team beat us in a game some years back. In all honesty, she is not wrong.
A dedicated collector of the following all too important things:
hats/caps/"other things one might wear on ones head".
my ancestors in photo form - dominating my living room.
a decent collection of not (yet) dead plants at home - some 30 plants more or less obscure in form from being terrorized by my Darwinistic (adapt or DIE) watering habits.

Experienced and survived a drive in the clouds after dark between Kholo and Achaltsiche, we were told the road could be bad, but ..., it was worse!, Georgia, 2022
Went to a "hole-in-the-wall" microbrew pub (Birraficio McKenny) in Genua, Italy, 2021.
Corona Times, so vacation in Swedish, climbing StorSylen (the peak 70 meter into Norway), but no border patrol at the top so it went fine, 2020.
Do Protest, but put your garbage in the right recycling bin, I love that! Martyrs Square, Beirut, Lebanon, 2019.
Learned well the rugged geography of Jerusalem during Jerusalem Marathon, built on 7 hills, my ass, a 100 if you ask me, 2018.
Managed to squeeze myself through the Tunnel of Love in the Cango Caves, Oudtshoorn, South Africa, 2017.
Reached the top of Triglav, highest mountain in Slovenia, just to realize that a thunderstorm was coming in, hearing electric charges under your shoes is an excellent motivation for a quick descend, 2016.
Watching the chaos that a powerful rain storm brings to Muscat, Oman, 2015.
Trying out to walk with snowshoes for the first time ever up the slopes in El Cajón del Maipo, Chile, 2014
The after party for the Rennsteiglauf (Marathon) in Türingen, Germany, 2013.
Feeling water from the waterfall Dettifoss some 500 meter from it! That how massive the amount of water of the fall is. Iceland 2012.
Try to not hit the tree frog pissing, that lived in my friends toilet, Darwin, NT, Australia, 2011.
Being ask as second question, first was, from where are you? if I wanted to marry her daughter of a 40-50 year old Serbian woman in a small city in Central Serbia while waiting for a bus to Ivanica, 2010.
Getting more or less lost up on the hills that surrounds Tromsö, Norway and drinking water from the streams up there, to get some stamina back, 2009.
Meeting a group of wild boars crossing my walking path up in the mountains above Mausouleh, Iran ,2008.
Visit an Ethiopian countryside bar/whorehouse and dared use their toilet, 2007.
Visited Delerium Cafe and drinking (stupidly) the Floris chocolate beer, Brussels, Belgium, 2006.
Watch the star striked night-sky, Timboktou, Mali, 2005.
Losing 500 HongKong dollars at the Black Jack table at Casino Lisboa, Macau, 2004.
Climbing up on the top of Santa Ana volcano, nearly beating the mandatory police escort, El Salvador, 2003.
Eating a tali-plate for under 10 Rupies in old Delhi district, India, 2002.
Taking the morning ferry into Mombasa, Kenya, 2001.
Being the only sunbather on Copacabana (kinda off season), Brasil, 2000.
Watching the total absents of sunlight in Pinkafeld, Austria for 2 min 41 sek in 1999.