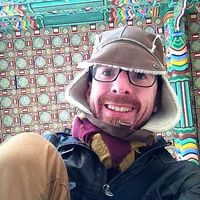 CURRENT MISSION
I’m currently travelling to meet new peoples and experience new cultures through the prism that is couchsurfing. I’m a totally geeky geeky nerd nerd that likes playing board games as much as going clubbing . Although I’m getting into my retirement age (I’m 36 now and only work part time) I can keep up with people in their late twenties going out clubbing if I pace myself.

I'm a kind of person that is rather introvert but can be extrovert when I want to be. As a result I'm kinda circular.. on the one hand I love house parties, clubbing and general nightlife. On the other I inevitably have to crash after being an extrovert and go back into my cave and do some programming or something.. lol.

I'm not a person that loves to be the center of the party though. or one of those "look at me" people. I love to give until I can't give anymore to others, because it makes me happy and the person I'm helping happy too so it's a win win I feel.

I try to be considerate, forgiving and the best person I can be; sometimes that's not enough of course because we're all human here.

In terms of my career I used to be a computer games tester. Some might say it's the best job ever, but tbh it's pretty poo. After playing the same game for over 2 years you get pretty burnt out. I have a mental health disorder that signed me off full time work. In other words I’m basically retired and I have social housing in an ultra modern penthouse apartment that has a nice couch to suit a single surfer (I’ve hosted both male or female surfers). I only just surfers with positive references after a bad experience involving my mums engagement ring being pinched.

I’m doing kung fu (wing chun) twice a week to help out with my high cholesterol and I try to eat fresh healthy food. I’d be happy to cook for my guests (Italian or Asian food, because noodles).

In some ways I'm not at peace with myself. I'm yet to feel like I have a defined identity and I lack a lot of confidence I think.

Sadly though, I have some scars like a lot of people and I'm still trying to find out who I am. In time I hope there will be no need to list negatives, only positives.

Side A: I try to believe in myself, because if I don't then I'm sure no-one else will. As a result I'm really a more positive, giving and considerate person.

A couch is available periodically in Chelmsford. The couch is either a private barn to yourself or a private room. Both are with en suite.

A bit of a blur - Biography of the band blur (reading atm. Quite... excelent.)

Anything by Rory Stewart.

There's too much to put here :).. and I'm very greatfull for the opportunities that I've been blessed with for meeting brilliant people and places.

I guess I could teach a few chords etc.

I can now program in JAVA, python, (c - well it's a lot like java really), JSTL, JSP, CSS, C++ and HTML. Matlab doesn't count because it's just rubbish. I can share what I know of these languages and maybe a bit of music too.