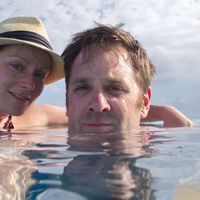 To see and then RULE the world!

What would they say or what would I HOPE they would say? Well, I think they would say that we (I'm saying we because this is my wife, Lola, as well as myself) are funny and kind, pretty gregarious and yet not party animals, by any means. We prefer to go out to eat or have beers with two or three people and tend to be home by eleven rather than three.
We are rational and smart and, as you can tell, modest.

It is always better to do something than to do nothing.

Had a few couples stay with us so far and have had nothing but positive experiences. Hoping to travel in the fall to Chicago, Detroit and points south and will then try to reel back in the favors!

I am a photographer as a hobby and a trade so the visual makes me happy. I love to go to new places to photograph new landscapes. I also love to do portraits of people I meet.

Punk rock, hip hop, classical, most everything except opera and country.
Lots of books and the New Yorker.

Awestruck is a big word. Swimming with multi colored angel fish in Cancun was pretty wonderful.
Being in a dust storm in the Nevada desert where you can't tell left from right from up from down and it really doesn't matter anyway. That REALLY blew me away.
Travelling up a hairpin road up a mountain in Switzerland in a big bus in the dark. More terrifying than wonderful but certainly memorable.

I love to teach photography to anyone who is interested. We both love to cook and can teach that. We love to laugh but I'm hoping you know how to do that already. I also think a LOT about politics (from a left wing perspective) and the folly of religion. So if those facts turn you off perhaps you'd be happier with another couch offerer!