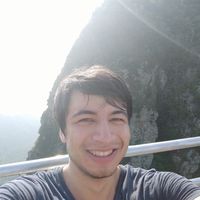 A student, that is living in Vienna.

Travelled the world. Think the world is pretty awesome. Lived on 3 continents. So much to see, soo much to do, so many people to meet.

I just remembered that last year i joined a group of couchsurfers, that were showing some friends the City of Jakarta from a different perspective. It was very memorable and still is.