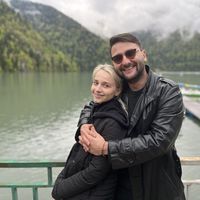 When we were traveling lots of hosts were too kind for us. Now it's my turn to be the greatest host.
Secondly, CS is the best way to "travel" when you can't travel. You receive guests from all parts of the world and they share their experience of the journeys, living in their native country or whatever. It delights!

I grew up in small Russian town in the Urals, (it's called Tchaikovsky in honor of great russian composer Pyotr Ilyich Tchaikovsky) there I had graduated from high school and musical school. subsequently I have been accepted in MIPT where I have defended bachelor and masters graduation thesis in economic field.
During the university study I was teaching math and physics and learning finance to proceed my career in finance.
Currently I have solid experience in banking risk-management, I’m working in AlfaBank Russia (ex jobs: Ernst&amp;Young till 2019 and VTB Bank till 2022).

Make love, not war
It sounds very common and simple but my philosophy is John's song "Imagine".
Moreover, I appreciate only scientific way of cognition the World. I mean I don't approve religions and other stuff. So-called Newton Philosophy.
My political views are quite liberal. I think there is only way of development society - it's freedom. What's the freedom is? No fear! Only a person who is not afraid can create beauty, is not it?

I travelled through Europe in summer 2014 and I've met a lot couchsurfers, who were amazing persons with beautiful souls. it gives me hope that this world is very kind and open-minded like I saw it. our parents couldn't imagine services like that, we became less closed and more unted. It delights!
I travel as much as I can. we have entered the amazing era, we can move around the world without significant difficulties in a short time. It delights doubly!

if you receive me It would be nice to visit some place with live music, it'd be extremely interesting to listen local music
secondly, I travel not only to see the World, i'd love to taste it! thus we can exchange skills in cooking!
Also I like to discuss about politics (yep, I know, we should avoid this topic on CS, but i'm interested in political life in other countries)

I can teach playing guitar and solve math problems :)
Or if you're interested in russian culture I can carry out brief excursion about different fields (especially about music)