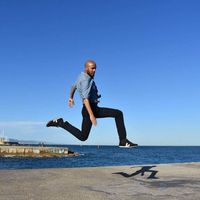 To learn as many languages as possible.
To establish real connections with other human beings.

I like travelling and helping people to travel and make the world a more interconnected place. I'm into learning languages (would love the opportunity to speak Spanish, German or practice my Italian) and sharing awesome experiences.

Just finished a master's degree in Global Studies...I'm working on a PhD in Lugano, Switzerland in Intercultural Communications.

Don't be afraid to send a message!.

Couchsurfing is a pretty awesome community :)

I've had a handful of amazing couchsurfing experiences thus far and I really want to pay it forward. Hopefully I can help someone out. If there's anything I can do, let me know!

moved from Heidelberg to Berlin to Buenos Aires to Delhi all within the span of 8 months. If someone had told me years ago that I'd be doing what I'm doing now, I probably wouldn't have believed them.

i can offer my story. I've lived some places and met some people...hope it's not boring.