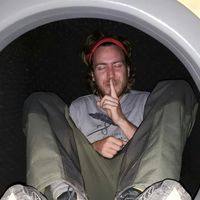 Doing a research stay in la jolla, california for 2 months, afterwards going to travel around the place for 3 weeks, than back to cold Germany

After school I went to south afrika to work in a camphill comunity as a baker for organic bread, after one year working there I went beck to become a professional baker in germany/berlin... but unfortunately my bakery went bankruped just a few months after I started my apprenticeship, as I had a french girlfriend at this time of my life, I went to france to study chemistry, with the idea to save the world one day, when the same kind of people who are destroying the world today will be needed to heal it !
Currently doing a PhD in bioinformatics, crazy stuff, which is best explained with cold beer :) atm I am in la jolla, california doing a 2 months reseach stay and learning how to surf (I am 2 days here and already in love with the place !)

Nobody is that crazy, that he could not find somebody else who is even more crazy, so he'll understand him. nitzsche

I life in freiburg with some friends in a community lifing, there is a lot of intercultural exchange and couchsurfers are welcome as often as possible !

I've done a tour with my bike leatly, from swiss to kopenhagen, there I met a lot of friends and slept on many couches, some of the people I only met on the same day or where recommanded by some other friends, I baked bread for all my hostes !
In Freiburg I hosted a few surfers, I enjoyed the time with all of them, even if I had not enought time to do some cool stuff with all of them...

drove with an old beatle (40 years) trough, south africa, mocambike, swaziland and simbabwe, 13000 km !
made a trip with my bike from bodensee ( very south of germany) till kopenhagen (about 3000 km) and baked bread for all my friends on the way ! check it out: http://www.youtube.com/watch?v=hwluW62dBO4&amp;feature=plcp

I will teach everybody who want's to know it how to make german rye bread !