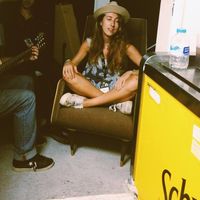 Trying to be the best version of myself

My name is Pilar, but I've been called many names (Pili, Pai, Pailar, Pepper, Pailipai, Cupy, Penny, and the list goes on and on...). I grew up in Marbella (Spain), which has always been my base camp, but I'm a "restless ass" (as we say in Spanish) and haven't stopped moving around since I had the power to do so. I'm just trying to find my spot in this world, I guess.

I like to be surrounded by nice people, see everything I can and live life spontaneously. You're welcome to join me.

I know it's typical, but just try to enjoy the moment, live life every day if possible, never say no to any opportunities that may bring fun or something new to your life, be spontaneous, never fear new experiences.

I've hosted a lot of people in my flat in Madrid and I must say I absolutely love it. Couchsurfing is one of the best ideas someone could have come up with.

Personally, I've never had bad experiences staying at someone's place through CouchSurfing, but I've stayed at unknown people's flats and, if I was able to sleep in a bed full of sperm spots, I think I can stay anywhere... So, as you can guess, I'm pretty chill in that aspect. I wouldn't repeat the sperm part though.

I have a bit of an obsession for music; Rock, Indie, Classical, Blues, Jazz and Electronic Music are some of the genres I mostly listen to. My greatest hours of pleasure are at concerts and festivals. There is nothing like listening to live music for me. I also really enjoy doing (and watching) ballet, watching good films and getting together with some good friends and organize a spontaneous trip somewhere; camp, bonfire and guitar = Paradise. Photography, film, advertising and graphic design are what I've been dedicating myself in the last years and, even though I love doing it, I don't love the current industry so much. Everything's internet now and it's not what I signed up for. So I made the huge decision of pursuing my dream job; working in Music. So, now I'm a Tour Manager for classical music orchestras and choirs and would love to move into tour-managing Rock bands :D. Maybe someday!

My film taste is either oriented for independent and arthouse movies and documentaries or those silly stoner or surreal comedy movies that sometimes reach the surface. I've reached a point where I can't stand watching a typical blockbuster Hollywood film, especially if it's a Drama and has been nominated to the Oscars. Nevertheless, there are a couple of famous filmmakers whose films I usually enjoy, like Woody Allen (old stuff), Wes Anderson, Richard Linklater, Tim Burton, Cameron Crowe, Coen Brothers, Richard Curtis, etc...

If I told you all the music I listen to, I'd be sitting here till next month... The Beatles, Pink Floyd, Led Zeppelin, Neil Young, Jimi Hendrix, The Rolling Stones, Bo Diddley, The Black Keys, The Brian Jonestown Massacre, Jefferson Airplane, The Doors, The Velvet Underground, Radiohead, The White Stripes, BRMC, Skip James, Bonobo, Nicolas Jaar, Erik Satie, Stravinsky, Rachmaninov, Ravel, are just a very few of the bands and musicians I like.. there are just too many.. but I think you can get the direction I'm going...

I usually like to read classic books. Some of the books I loved were Humiliated and Offended by Dostoievsky, For Whom The Bell Tolls by Hemingway, Dracula by Stoker, Pride and Prejudice by Austen, The House of Bernarda Alba by Lorca, some Edgar Allan Poe's stories, Steppenwolf by Hesse, and other classics.

The first thing that comes to mind was a night on my InterRail trip, when my friends and I decided to sleep in the streets of Paris and I will never forget the moment when a homeless guy came to us and said: "Hey girls, you're sleeping in my place!" Eventually he let us stay there while he continued drinking his beer and driving around with a bike he "found"... Other homeless people came to us and were veery nice and specially funny... they were drunk..

One of the most beautiful, breathtaking and unforgettable experiences I've had was in Canada when my uncle and I took our kayaks to some recondite part of the Saint Laurent. The only thing we could hear was the breathing whales around us. But, if that wasn't enough, the Beluga whales decided to join us. You can't imagine what it is having 20 curious Belugas around you, playing and racing with you.

To sing Black Rebel Motorcycle Club's songs with lead singer Robert Levon Been after one of their concerts in Madrid.

See The Rolling Stones rocking on their 2007 world tour. Best concert of my life!

A week at Glastonbury. I don't think there's anything left to say.

Rappelling somewhere in Utah, at 2am with a full moon, tipsy and in a mini-skirt.

My sister and I had just finished eating a Dürüm kebab at the Hamburg Reeperbahn Festival in 2018, when we suddenly saw the legendary Klaus Voormann walking by with his son. As a natural and unexpected reaction to having seen him throughout my entire life in Beatles documentaries, I shouted "heey!". He turned around, confused, and I realised he, obviously, had no idea who I was. So, embarrassed, I improvised complimenting his exhibition at the festival, which I had visited the day before, to which he smiled and thanked me. They continue walking and my sister and I start having that moment when you're like "omg, omg!", when suddenly, I see Klaus and his son stopping, talking, and turning around. So, I'm like, "omg, they're turning around, act normal!". He approaches our table and asks us if we mind them joining us. Naturally, we said yes. We ended up spending a lovely hour or so talking about how awesome Hamburg used to be back in his time, how live music shows have changed and about different countries and their music culture. Both him and his son really were some of the loveliest and warmest people I have ever met. They invited us to the exhibition the next day and we received a personal tour of all the artworks. It was truly amazing for such Beatle freaks as us. But, the part where we did something to be proud about was to be able to make an impression, whatever that may be, on such a legend. He repeated one thing with awe; "Two Spaniards speaking perfect German. Incredible. Incredible."

When going to a new country, always try to speak a bit of the language and never assume people speak English. You'll get treated better and will end up having better experiences.
One of my tricks when looking for a good and cheap place to eat is to approach an elderly local. They always know the best spots and are usually happy to help out and share their knowledge and plus, they have the time to spare. Most times, they're so happy to have someone new to talk to, that they even introduce you to the restaurant owners as their friend already, so you get treated with extra care. To me, it's the best way to get to know a place.

Everything but my organs :D. Sharing's caring.