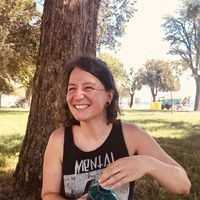 I am a doctoral student in (Afro-)American Literature and sometimes working as a waitress and kitchen-aid. I am also a musician and do a lot of handicrafts.
I'm interested in a lot of things, mostly music, literature, art, cuisine, crafts and politics
I like music and its history, "american myths", action-kitchens, beat-literature, the adventures of pete &amp; pete, prince valiant, great danes, just to name a few...
Generally, I like being among a lot of people. sometimes not. but isn't that the way of everybody?

I try to be uncomplicated and I expect that from my guests as well. this also includes accepting the other persons complications:)

I think cs is a great opportunity to create more warmth in this society. We all need love and some positive experiences are good for everybody.
Solidarity forever!

I have been a member for a long time, but not very active during the last few years. I hope this will change again.

saying hello to a great dane

Sometimes I have a spare bike; I generally like sharing stuff.