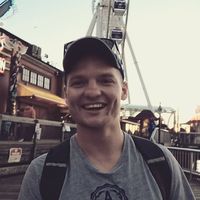 Hello everybody! My name is Pavel (Paul, Pablo, Paulo or other equivalents – it doesn’t matter for me). I’m a software programmer from Russia, Astrakhan. I grew up there. It’s one of the most really warm, sunny and friendly cities of Russia. I was living in Moscow for 3 years (2014-2016). I was studying and working there. It was a really interesting part of my life. I don’t like to stay at one place for too long - I am always looking for new ideas, new horizons, I need motions every time. My lifestyle is always active and healthy. I like to set ambitious goals and strive to achieve them. I always try to spend time with benefit and pleasure. I like to discover something new: places, technologies, books, music etc. With great pleasure I meet new people as it's always interesting and it gives me new experience!

I've lived in The United States for 5 months. Actually I was taking part in the programm Work&amp;Travel USA for students there. I've done a lot of amazing thing for that period. I've travelled from West coast of the country (Portland, Oregon) to East coast (New York) by car.

I like to meet interesting people especially from other countries, to get to know their culture, traditions, lifestyle, cuisine, etc. I am sure that I can learn something new from them. I also have a lot to tell them about my country and culture. Thanks to the CouchSurfing people become closer to each other!

I have a wide variety of interests, and, perhaps it's easier to list what I'm not interested in, but I’ll try.
I take up sports. I’ve tried many kinds of sports such as basketball, volleyball, swimming, football, American football, chess, boxing, canoeing etc. I am a master of sports in boxing and kickboxing. It’s my highest achievement in sports.
At my spare time I often read books. I use one of the most popular Russian social network for literature (www.livelib.ru/reader/pppetrov). There I write reviews, play games, take part in competitions or challenges etc.
I like walking. Sometimes I just walk around the city, visiting parks and places of interest. I also like night cycling. By the way, I upgraded my bicycle myself. I think it’s useful, handy and pretty cool to do something by yourself. For example, I also learned how to play guitar by myself. I watched YouTube and just tried to play, and only sometimes I asked advice from my friends, who simply shared their knowledge with me. I like to build positive and based on mutual understanding relationships with people, and really want to hope that we’ll be able to help each other in the event we need it.
I used to watch a lot of films and serials, but now I am doing it less and less. I prefer comedies and sitcoms.
I want to learn Spanish, because I like music, especially Spanish guitar songs. I want to sing the songs well. It’s my motivation. But initially I’d like to speak fluently in English and to know all about the grammar in order to be able to read books in the original and freely communicate with English speaking people.
What can I say in general, - I am interested in everything what is interesting!

I'm a music lover. I listen to almost everything, but I don't like hard music. I listen to music everywhere: at home, at gym, when I go somewhere etc. I prefer classical music, but also I like to listen to dancing style of music.
I play guitar and I found it very amazing to play the songs of my favorite guitar player and famous Russian singer Vladimir Vysotsky. He was also known as Soviet Bob Dilan.
I like to watch the movie called "Gentlemen of Fortune" again and again, because in this film there are a lot of funny but true to life situations, which can happen with everybody. Also I like it because this is the movie of the old days of Soviet Union, which shows you an interesting life of that period of Russia's History. I’m sure that once you see it you’d like it a lot.
My favorite books: “The Twelve Chairs” and “The Little Golden Calf” by E. Petrov and I. Ilf. They are really so called “Masters of a Word” and my favorite writers. I also like poetry from all over the world. I can introduce to you a lot of masterpieces of my favorite and well-known poet Sergey Esenin.
An interesting fact is that during the time of the SU it was very difficult and practically impossible to go abroad. But listed above writers, the singer and the poet managed to visit America. Vysotsky gave his music concerts there, Petrov and Ilf were gathering the material for their future book, called "Little Golden America", describing the live of average Americans of that time (1935). The poet Esenin was deeply in love with a famous American dancer Isadora Duncan.

I travelled by hitchhiking and other kinds of vehicles through Europe, starting in Russia all the way to Portugal. And by the way, in Spain, one “funny” case happened that I stayed without my passport=)

I can tell you a lot about Russia, its people, culture. Russia is a huge country with its deep, wide and various traditions. I am sure that other people will have interest to listen to me to understand my country better. I agree, that nowadays thanks to Internet and other services people can get a lot of information about Russia, but I think that I can share really true live stories about my country and its population without widespread wrong opinions.
Plus, I can share my knowledge about computer. I can show some professional skills in this area, if you want.

Basically, I can share with hosts conversation. Communication is more a necessity than just an interest, but with a good speaker there is always something to talk about, and the conversation can be very interesting. I can talk on different topics. The only thing I always try to avoid is talking about politics. I am also a good listener. I have a good sense of humor and I like making jokes or take part in something fanny. I also know several games and can teach how to play.
Since my childhood I found it interesting to know how to cook, I had to learn it for myself, and now I can easily prepare some delicious Russian style food or help with household chores.