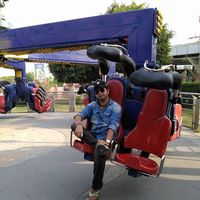 I'm an uncomplicated soul with pure intentions, here to live a simple and serene life, without hassles, hitches, interuptions and botherations of any kind. I seek stillness n tranquility amidst so much chaos and unrest around. Fake personna, pretentions, feign attitude is what i love to abhor. People who bear a grudge against me, harbour ill-will against me are nerds of an unsual breed. I'm indifferent to criticism, mocking, ridicule and goading. so don't waste scores of your energies in it. You won't pull it off is what i can give you an assurance n confirmation for.Hope is an indulgence I don't have time for. Causality is something that I firmly believe in. Life is a precious gift to me. Not many people acknowledge that. Spate of failures is what I have been through, immense frustration n humiliation is what i have endured, which have made me impassive n nonchalant to emotions, feelings n sentiments. "There is no god" is a claim that i assert emphatically. I have no qualms when I say that god is an imagination of a nascent mind n half-baked intellect, which is reluctant to accept the realities of life and is weak enough not to come out of the the self-created wonderland. Humanity is the biggest religion for me. When you do good for mankind, you do good for yourself. If you have millions to spare, spare a thought for the needy n downtrodden before you splurge it all. I seek perfection in whatever activity I take up. Execution with precision is my USP. Knowledge is meant for accumulation n dissemination." Knowledge that can dispel ignorance, uproot deeply ingrained n entrenched prejudices" is a lore that i wish to convey to my fellow homo-sapien mates. Come what may, I will never abandon my incessant quest for knowledge and I suggest you all do the same. Exaggeration may be one of my shortcomings. You may sense arrogance too in my writings. But flawless n impeccable people are found on the land of milk and honey n not on the land of flesh and blood. Politics n religious rituals and customs are an ailment, a scourge, a humungous impediment in forging a peacful society which is free of rules, caste, creed, bias based on any ground, indiscrimination of any kind. Science is the answer to every question that ppl have. It is meant to enlighten minds, purify thoughts,remove misconceptions so that ppl are driven by logic n rationale rather than sentiments. I come in peace and I wish to leave in the same fashion with no one lamenting my demise, no songs of mourning being hummed, solely n lonely, I will carry out the journey which will culminate with the salvation of my soul.

Travelling and exploring the cultures across the globe.. !!!

Whatever they gonna be looking out for !!!