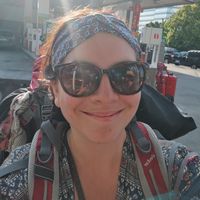 My name is Rachel, I’m 32 and I’m a social worker. I’m a smiling, sociable person who likes meeting new people and exchange with them. I’m naturally hearty and I like to have fun but I also like to sit down sometimes and relax. I like to have pleasant times with my friends and it often goes through going out or having a nice meal. I like to cook for people I like. This is also the atmosphere at home.

Regretting nothing in life and accepting your choices.
Don’t do to others what you wouldn’t like done to you.

I decided to register to CouchSurfing because since I became independent, I want to live my trips differently, to be closer to the locals and get off the beaten paths intended for the tourists. I really want to fit in as a resident of the country in which I go. That’s why I think going through CouchSurfing is a good way to start.

I travel and I host for several years now. I had the opportunity to meet people from all around the world and to embark on incredible experiences such as hitch hiking in Romania with an Israeli, ride a scooter across town with Vietnamese or just discovering my own town again with foreigners staying at my place.
Meeting people, especially locals, can only show you the good in people.

I’m currently interested in photography that I practice occasionally, cinema, music, sports (hiking and I'm beginner climber). I also like to watch TV series or simply read a book. My living room is full of books. I’m naturally curious and I like discovering new things

I listen most willingly British pop and rock such as Muse, Coldplay, The Beatles. But I also listen to other music genres, one of my former roommate being a DJ.
I like to go to the cinema, watching action but also auteur movies, comic as dramatic. It’s the cinema atmosphere that especially pleases me.
As for the books, I alternate crime novels, thrillers and travel stories. I also like testimony books and I expand my knowledge in social sciences with my work.

I hitch hike since 2015 and I had the opportunity to do a road trip in Romania where I could travel around hitch hiking. I also hitch hiked during 2 days to go from Lille to Prague (about 1.000 km). This was quite exhausting but very fulfilling.

I can show you the city of Lille, its culture and its unlikely places. I could recommend you places according to your wishes (walking, eating, drinking, partying…). I can also share some of my cooking secrets…