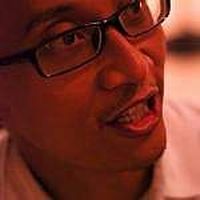 why does cheesecake only exist on earth ? so then ... what's the mission?

Two roads diverged in a wood, and I took the one less traveled by, And that has made all the difference.From a poem by -Robert Frost

trying always to share space with others, asking for a tiny little space for me, stay connected and if it's possible...connect them as well!

through good and beautiful human souls crossing my path (our paths)

to live, to observe, to ask, to feel, and to try to understand bit by bit which brings you to another mysteries! lovely!

Stumbled into group of amazing people (the youth, the elder) during the 'Alternative Nobel Prize' meeting. Those who dedicate, sacrifice, risk, and give themselves for the better of the world.

Early morning barefoot on the wet grass, closing eyes and breathing the air, listening to the sound of nature

Well, I did teach wing chun (a chinese martial art), and also I do massage at least to make people's muscle more relax, and would love to teach and share several Indonesian foods, and chai tea , :)