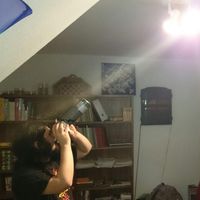 I am a student of computer science who wants to travel the world, learn about different countries and meet nice people. I am very easy going, relaxed and I like crazy stuff like climbing and random last minute travels. Being around nice people is pretty important to me and I spend much time meeting my friends and beat them in Mario Kart.

I am sensible for very loud noises because of an accident years ago, so I couldn't join you in the disco, but you don't need to whisper while talking or anything.

To meet nice people all over the world and learn more about different countries. And meet the locals of the country, not only the guy who runs the hostel and tourists who stay there.

Gaming, Climbing, Traveling, Pen and Paper role playing games, Bike tours with friends to lakes and have a barbecue there. I once made a computer game with several people around the world (south africa, europa, usa). It is fun to meet people from different countries and do cool things together.

Book: Tracks in the Snow by Karl Heinz Witzko (Fantasy)

Movie: Leon The Professional and Matrix (Part 1 and Part 3)

I and other students of my University planned a flashmob at our local mall.
We made around 200 plastic turds, carried them to the mall in a trolley, and created a big turds fight flashmob. We even made it to regional newspaper.

If you like I can teach you german, math and computer stuff. Not just the technical side but also some artist stuff like image editing software or 3D modelling. I worked at a tent camp for children, so I know lots of ghost stories for campfires. Also there are some german drinking games I know and I can cook german food.

I want to learn about other cultures, meet nice people, want to learn more spanish and see new places. If you could show me your city and show me nice pubs, parks and nice people I would love it. Especially to have barbecues with nice people.

Plus if your pc, Nintendo Wii or laptop is broken I can most probably fix it. And I can do some housework or getting some groceries.

Hopefully I can have some nice barbecues with the hosts and their friends.