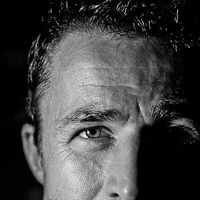 I´ve visited 75 countries. Once I worked as an actor in Bolivia. Later I went to Africa, where I met four Somali pirates and made a film about it. It was broadcasted in 19 countries.
In between I studied project-leadership and antrophology. I´ve used both to find out how to live my life: I´m a traveller, and I live from telling stories about my journeys. It´s really great.
I´m curious about people, places and how we live together on the planet.
I like talking, partying and letting loose energy. In the good way.

When a strong wind blows, some people build shelters, while others build windmills.

I´m here to experience the world of couchsurfing. Hosting and surfing. I think, it´s a great concept!

Cooking! I love cooking fine foods - French, Italian and Nordic. And I like cooking, while guests are relaxing with a glass of wine in my kitchen:-)
Music - I play guitar and caixa-drum (Brazilian samba)

I´ve worked as an actor in Bolivia for six months in a Bolivian tour-theatre. My first real foreign friends.

In Brazil I played with a sambaschool during the carnival - and filmed at the sambódromo in front of 90.000 people. It was amazing.

When I was in Afghanistan, I understood, what had actually happened there. What had created the Taliban. It changed my view on how we treat each other globally.

And meeting four pirates in lawless Somalia taught me, that people are people, no matter what we do. Even though some do very bad things.

How to believe in oneself. How to create dreams and how to find the will to reach them.