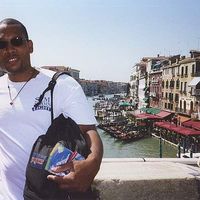 To be a world traveler 5 continents, 20 countries

I picked up my passport a couple of years ago. And I want to see as much as I can before renewal.
Addicted to partying and traveling and all the crazy stories that come with it.
I like to work hard and play hard. (And I throw awesome pub crawls!!)
I also like to write and catch a movie or two on my free time.

I would like to have a miniature giraffe; I'd called him "Neck-kid".

I have to say that even though I signed up some time ago, I only started hosting for a few short months after a couple or friends at a hostel in Calgary convinced me of how cool it could be and the friends I could make along the way. That said after having a blast with my first request, I never looked backed.

movies, board games, books (I have an actual library in my apt!),NCAA, Superbowl, lifting weights, volleyball, hanging out at the beach, partying with friends, and bbq of course

Some of the states I've been to:
visited 15 states (30%)Create your own visited map of The United States or Triposo world travel guide for Android

And some countries so far:
visited 11 states (4.88%)Create your own visited map of The World or Brazil travel guide for Android

My music interests vary mostly from my time as an Alaskan Fisherman. ("Yes, I was one of those guys.")
And if you stay at my place you can get a sense from the books on the wall and the DVD's and iTunes music as that I keep.

I saw a moonrise in the Gold coast of Australia. It was amazing. (I actually thought the world was going to end!! LOL My friends made fun of me!) Also sundown on the islands of Fiji, truly spectacular. The sky turned crimson and everyone had a reddish hue!

-Went rock-climbing in Fiji after drinking a lot of kava.
-Worked in Alaska as a fisherman during my junior and senior years at university.
-swam with sharks in Fiji (although I didn't know it at the time!)
-Traveled across the US from WA to FL by bus and train.
-I have an insane talent when I am in a foreign city of getting completely lost at night only to find my self at a "random" party!