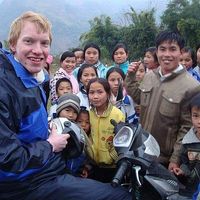 My name is Raymond and i live in Holland. Until my 17th i lived in Wormer. From my 17th till now i lived in Zuid-Scharwoude. Both in Noord-Holland. I studied Economics and i am working at the goverment until 1 november 2010.

I like poker!!, fitness, Jiu Jitsu, Running. And i like hanging out with friends and make fun in life.

Everything in life is a system. You have to understand the system to beat the system and become the best!

I made two travels of one year. One to Asia and one to Australia. Finally i settled down a bit and got my own place to live now.

To share my joy to the world and still meet people who are open minded and love to travel like me. I keep my couch available for others now.

In 2010 I couchsurfed at several places in Russia. The cities were Saint-Petersburgh, Moscow, Irkutsk and Ulan Ude. In 2011 i couchsurfed in Jakarta, Indonesia. And I participated at some events in Ho Chi Minh, Russia, Jakarta and Bangkok.

Back in the Netharlands, when i have time, I visit the weekly meetup in Amsterdam. I hosted somebody already and I love to host people who wants to come to Alkmaar and see something more of the Netherlands then only Amsterdam

There are so much things

Teach
- Computers
- Things I already learned in my life

Learn
- Built a sustainable strong mind!
- Communicate with people on a powerfull way