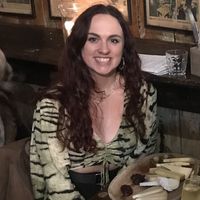 I’m new to coach surfing, but I decided to join the community after hearing of the great experiences that some of my pals have had. It seems like a brilliant way to make new friends and explore new places and different cultures with locals.

I enjoy all forms of art and love to read and doodle for fun. I am learning to play the drums with the dream of one day becoming a rock star legend. I also love listening to jazz, the blues, hip-hop, samba, and more folksy styles of music.

Lots of Kurt Vonnegut novels on my bookshelf. I studied Philosophy and Politics at university, so some books by Foucault and Habermas have an important place, too.

I really like expressionist artwork, in particular, pieces by Lucian Freud and Francis Bacon.

Movie-wise, I especially enjoy watching Tarantino and Ritchie movies. Top films also include things like The Shawshank Redemption, Four Weddings and a Funeral, Fight Club. And most things starring Jack Nicholson, Morgan Freeman or Robin Williams. That kind of vibe.

Climbing the very active Mt. Fuego in Guatemala gave me a new appreciation for how Frodo and Samwise must have felt on their quest to Mt. Doom, Mordor.