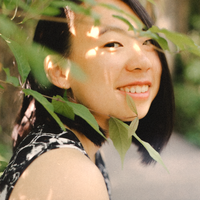 Curious soul, anti-social social butterfly, likes to discuss about anything - current affairs, novels, feminism, economics, climate change, humanitarian causes, you name it.
Love to do anything outdoors/in the nature like hiking, but also like to just walk in a park and nap on grass. If you want to know any green parks in Tokyo for a good nap (or a jog), I can give you a whole list!

Also: Trying my best to be plant-based for the environment :)

To give back to the CS community - it has given me great experiences and friendships! I also love learning about new perspectives and cultures.

Haruki Murakami bends my soul in all the right ways.
If you know (and like) zalagasper - we can be soulmates.

Attended a Greek wedding in Serifos Island, swimming in a midnight Aegean sea, and dancing under the moonlight when I was 16.
Going on a "cheese trip" around UK to learn how to make Stilton cheese.
Climbing up the Bosnian Pyramids in Visoko and getting lost in the woods.
Going to a Slovenian grandmother's birthday party in Maribor, Slovenia.
Sleeping under shooting stars in Serifos, Greece.
Seeing my idol, Haruki Murakami in real life!
Becoming a godmother to a most beautiful human being :)