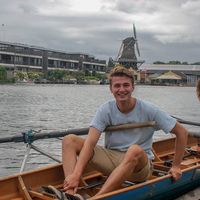 My name is Reinier, I am 22 years old and currently living in Tunis, Tunisia. I studied International Relations and Organisations in Leiden, the Netherlands.I love to travel the world, meeting new people. Getting to know more cultures. I have visited the Indians in West-America but I had also the privilege to get in touch with the Turkish culture in Istanbul. But also living in Europe made me realise that this tiny continent contains so many cultures! What is a better way to get in touch with these cultures? Yes you are right! couchsurfing!

Meeting new cultures/people. Get to know more about other cities. There is no better way to learn a new culture than sleeping with the inhabitants

I had the privilege to have an internship at the Permanent Mission of the Netherlands to the United Nations in New York city! It was a dream came true.