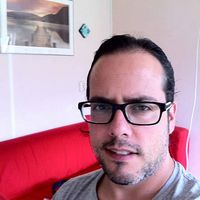 To spend my life for as much as it is worth.

I am 42 and from... Well I guess I'm not quite sure anymore. I'm just about to start a couple month Mexico trip from TJ to Mexico city (March-May 2022) let me know if you have any suggestions.

More general though; I was born in Milwaukee, WI, lived there for 20 years then moved to Los Angeles for another 13 years. I spent the last 8 years between Silicon Valley (where my lab is), Orange County, Wisconsin and abroad in several different countries for my masters, Mexico, and Hungary. I'm a vancamper and basically - "wherever I may roam; where I lay my head is home".

God is Love
Seek and you will find.
Fortune favors the Brave.

Here and there I appear at events, drink too much and talk about God, Artificial Intelligence, String Theory anything Mathematical, and Politics!

I have couch surfed several times, (in Italy, France, and Mexico).

Pretty much anything Theoretical, especially God and Physics.
I am on an endeavor to model the 'Mind', see my website https://www.B-Theory.com
I'm also working on a startup making mathematical art, it is currently where all of my money goes - over 2 years in the making, but I'm almost there.

For movies, Event Horizon, Aliens, Matrix, Blade, Johnny Mnemonic, Equilibrium, Hero, The Fountain. For music I like Trust Company, Enya, NIN, Linkin Park, Live, Stabbing Westward, Smashing Pumpkins, Goo Goo Dolls and Enigma, to name a few but I'm also a fan of techno'ish stuff. For books I like The Hitchhikers Guide to the Galaxy, Neverwhere and The Ender's Game series.

I have been able to see life from both high up in the Hollywood hills as well as from sleeping on the sidewalk in Santa Monica. I failed a big chunk of High School but ended up getting myself in to Cal Poly, Caltech, JPL/NASA, and the Erasmus Mundus ALGANT Program for my masters. I also spent a year as a full time volunteer at a church, (Dream Center in Los Angeles), where I helped people that really needed it. I have gotten to travel the world and help discover some of the equations of the Universe! I've lived in my car/van several times as well. There is so much more and I keep dreaming of the next life experience - if you don't try for one, you will just never know how it could have been...

I would hope to think that I have a little to offer, (I think we all do). I can however program in several different languages and have been through several years of Physics, Mathematics, and Computer Science. I currently build AI models for understanding the brain/mind. I've done a lot of web-design/development in the past. I've done a lot with cryptocurrencies in the past (mostly mining). As for learning, like everyone, I'm a student of the world but am an avid seeker of knowledge, I believe it is what makes us self-aware (part of what I'm trying to mathematically model). Take the Red Pill and ask me about it, you'd be surprised at how deep the rabbit-hole goes.

Knowledge and damn good conversations is probably the best things I have to share - sometimes you can't just travel the world; I bring the world with me. Also, if I drink alcohol I'm reasonably good at playing the guitar ;)