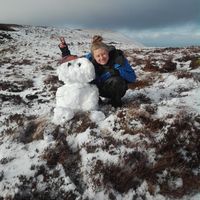 I want to get into this school: http://earthship.com/academy because I think to change the way we're living, as a species, we need an alternative to provide in our basic needs. Because right now most people are dependent on the way they're living, a way that's destructive to earth and life, for their basic needs. Will you make choices that are 100% respectful and caring towards others and your environment, will you make concious choices, when that means you are not sure anymore you will have a house? Or food? I think not. So I want to offer self sustainable houses. Or information about them. Or help out building them. Anything to help provide them.

Play guitar. And singing. I like to make music with other people, especially when other people sing. Alone or together with me. I like to improvise or to play songs I know, but not necessarily exactly in the same way. I like finger-picking the best, at the moment.

I like walking in the woods. Although in the Netherlands, we actually don't have real woods. I've been in woods in Sweden, they were amazing... I like climbing trees. I'm not very good at it, because I think I'm quite clumsy and not so strong. But I guess I've got some skills because I do it from time to time. small trees I just like to hang out in, climbing from branch to branch, and trying to get as high as possible. In tall trees I sometimes climb with climbing gear.

I like drawing and painting and writing,. It's been some time since I've really been into creating something. These are some things I punt online when I was in highschool, About the time I was 15. So that's.. 2006/2007. http://www.elfwood.com/u/brechtwrites Not so much survived, because it gets deleted after some time if you don't log in, which happens when you forget your password. (and aren't really motivated to get it back)

I really like dancing! Yeah. I like to dance at alternative/underground places or with friends at their private parties or just at some random night in the living room with my friends when there's not really a party at all. I like those scenes best because I dance like crazy, and I feel free to do so when there's more people around me that don'tcare about how they dance and what it looks like than people who do care. What I like most about it is trying to not interfere with the way my body wants to move.

I like to dumpsterdive. Or recycle or skip, as some people call it. I like to search the trashbins of supermarkets and big compagnies to see if there's interesting or useful stuff. Or just weird stuff. It's partly because it's a cheap way of living, and partly because it's such a shame to throw all those things away, but mostly because I enjoy it. It's a bit like treasure hunting.

I like to play cards, or dice, and sometimes other games like settlers of catan. I would like to play capture the flag, but I only once made enough effort to get enough willing people at a nice place at the same time.

I like to walk long distances. But it's been more than a year that I've been away walking for a whole day.

I like hitch-hiking. Not knowing when I will get picked up, and knowing there's no use to worrying about it, makes me relaxed and sometimes cheerful, sometimes it's a way of resting.

I like reading. Multiple things of course, but I like all the discworld books of Terry Pratchett. Theyre way funny (: witty. With a lot of puns. 'unseen academy' and 'hogswatch' are maybe the best ones.

I started couchsurfing for some adventure, exploring. Because a normal life happens in a very small world, I think. A bit too small at least. And people from other countries interest me. Also when I started I walked around more often, and I like walking several days but I dislike carrying a bagpack. Also I like to be a host and have some nice people over. At that time I lived in a big student house, where I would share my spare key with people that came over and I would just go to school and do my things and when I came home I'd find someone in my room. Or not, and when I coocked I made some more for others or I'd find there was already food, and I enjoyed that.

About my account being 65% ready: I don't have facebook, I don't own a computer, and I'm very happy about those things. That's one thing that makes my poor, sweet account being called incomplete. Then there's the vertifying, I don't see how paying money each year makes someone more trustworthy. While I do like this site excisting, and I'm happy people made it and are still working on it. And if they want to make some money with it by giving this option that's great. Just saying I think my account is good the way it is.

holding a snake, because they're all muscle.

I want to do wash the dishes! You can dry them, or give them to me, or make some tea.