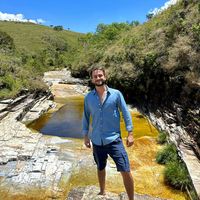 Ricky is an adventurous brazilian and amateur guitarist trying to find Nemo. No, wait... I mean, a map to the Neverland! Or he wished so. Hahaha, he is also a Civil Engineer who works with Infrastructure &amp; Capital Projects in his free time. Boring, I know. 🥲

This is a dynamic and open minded boy who has the dream of traveling all around the world, enjoying the best of what each place has to offer. Ricky doesn't want to be a tourist, he wants to be an explorer!

He believes that getting to know a new country is much more than rushing through the capital and uploading a cliché picture to his social medias. It's all about immersing into the culture he's surrounded by.

When he lived in Canada with a family of philippines and students from all over the world he realized that none 5 stars hotel would have ever given him better memories than the ones he got from staying at that incredible place.

What couchsurfing has to offer is exactly that, an opportunity to dive into a new world. Its philosophy turns into an amazing lifestyle and it's the best way he has found to meet awesome people while exploring our beautiful planet. 😊

He loves hiking and getting in touch with the nature just as much as a good tv show marathon or a boardgame match.

Sometimes you catch him reading comics, writing poems or cooking delicious dishes and eating them right after. Well, I think he might offer you a bite. 😛

Sure, he has many hobbies. He wants to share them while having deep and meaningful conversations, but also simply joking and laughing about each other.

From Jack Johnson to Linkin Park, he loves music and the harmony between the instruments in general. His friends usually say it's common that he brings his calm personality into the melody of every single song he plays.

A boy has his favorite movie directors. Tarantino, Scorsese and Nolan are some, but he actually loves all about international cinema and how different cultures can create unbelievable masterpieces from totally unusual points of view. Have you ever watched the best Brazilian movie of all time? Here’s your chance!

After a school project about Homero's Odyssey, he fell in love for the Greek Mythology and has already read much more about it.

Even though he has never gotten an acceptation letter to Hogwarts, Harry Potter is fantastic and still must be included here.

He loves comic books, no matter its theme. The illustrations are fascinating and he would really enjoy learning how to draw someday. By the way, his favorite superhero is Spider-Man.

Horror stories have always caught his attention. The more intriguing, the best. It has been a time since he came up with the idea of writing a book, but it's still in development.

He has traveled almost the entire brazilian coast by car. To the missing provinces he went by warplane, pretending to be a parachutist but actually enduring a painful backache. I guess it was fun.

When he was in highschool, he has built a rocket launcher made of plastic bottles and pipes for the scientific project. Even though they all fell on a glass rooftop, he still won the first place on it.

Although he can only play guitar, he has a drumstick used by Eric Singer during a concert of the band KISS in 2009. It was one of the best concerts he has ever watched.

He has been in the Vancouver streets during the final hockey match between Canucks and Boston in 2011, which caused a riot, destroying the downtown. Ricky is still alive.

Once, he has managed to convince some friends to break into a military cemetery at midnight to tell a couple of horror stories. It wasn't that scary, except for the cats staring at us.

And of course, I can't leave behind the 80 days he backpacked with his guitar around Europe before coming back to his home country. His couchsurfing spirit was born there, and you can follow all that story (and even more) on the pictures of his instagram.

Ricky was a calculus tutor for 4 years in Brazil. He doesn't want to teach you math, though. He has plenty of experience and patience to teach you anything he knows and that might interest you, except for math. 😛

He wants to learn more about your culture, your story, your language and whatever you might want to teach. Knowledge is the most valuable good we have and he won't refuse that!

At the moment, Ricky is interested in developing his spanish and french skills. In the sports field, he has been playing footvolley quite often at the beach, and I think he would like if you joined him. Also, he would love to learn how to dance without looking like a robot. 😂

Also, he will always be happy to share his place in Rio de Janeiro with someone who has done the same for him before.

He can play you a song in a rainy day or make you banana pancakes with brigadeiro (Google it!). Well, I think it overcomes Jack Johnson's.

Actually, Ricky is quite a good cook. 😋