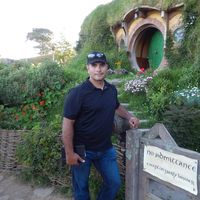 Sometimes you will find my mini golden-doodle at home. https://www.instagram.com/dashidoodle/

If you are new to CS or haven't been hosted on CS, please read this link first, as it will be helpful for any host to whom you reach out: https://support.couchsurfing.org/hc/en-us/articles/200640010-How-do-I-write-a-good-couch-request-
PLEASE NOTE: Due to the large number of copy-n-paste and non-personalized requests received, any such requests will be declined automatically without explanation. An example of such a request: "Hi, I need a place for 2 nights, can you host me?".

At first Couchsurfing was an experiment for me. After meeting and hosting some of the most interesting and wonderful human beings on the planet, I realized that CS can also be life-changing.

Most of my Couchsurfing experience has been as a host. However, I travel a lot and would prefer to stay with locals instead of chain hotels to get a true feel for the place and culture. I surfed in Chicago, DC, Argentina, and Paraguay with truly fantastic hosts and would like to do this more.

I live on Bainbridge Island, a 35 minute ferry-ride away from Seattle. My home is on the water in the Agate Pass, and I have paddleboards and kayaks to enjoy the beach and Puget Sound. I have a separate room and bathroom for guests. My home is a gateway to Western Washington and isn't super-convenient to quick trips to downtown Seattle (15 minute ride to the ferry, 35 minute Ferry to Seattle, plus wait times means any trip to Seattle by car requires at least an hour). My mini-golden doodle may or may not be at home, as she splits her time between Seattle and San Francisco (she's quite the traveling puppy).

I used to get many daily requests from CS when I hosted in NYC. Most of them were cut-n-paste generic requests or one-liners just looking for a place to crash. If you are new to CS or haven't been hosted on CS, please read this link first, as it will be helpful for any host to whom you reach out: https://support.couchsurfing.org/hc/en-us/articles/200640010-How-do-I-write-a-good-couch-request-
Due to the volume of requests I used to receive in NYC, I made it a rule to decline all generic requests.
Please take the time to point out why you'd like to stay (beyond a free room) to ensure a positive experience for both hosts and surfers on CS.

My favorite book genre is Sci-Fi/Fantasy. Some of my favorite authors include R.A. Salvatore, Anne McCaffrey, J.R.R. Tolkien, C.S. Lewis, J.K. Rowling.
- The Legend of Drizzt Do'Urden
- The Dragonriders of Pern
- The Moonshae Trilogy
- The Lord of the Rings
- The Chronicles of Narnia
- Harry Potter
- Artemis Fowl
- Encyclopedia Brown
- Sherlock Holmes

Finally, while this category doesn't call for it, I would be remiss for not listing my favorite video games:
- King's Quest Series
- The Secret of Monkey Island Series
- Castle Wolfenstein and Doom (originals)
- Pacman (original) and pretty much the whole Atari 2600 era of classic games
- Super Mario Bros (and pretty much the whole NES era of classic games)
- Halo, Gears of War, and Crackdown
- Warcraft and Starcraft
- Oblivion, Skyrim, and Elder Scrolls Online
- Mass Effect
- Diablo, Diablo II, Diablo III
- Ori and The Blind Forest, Ori and the Will o the Wisps
- Portal
- Braid
- Limbo

Hard to pick just one:
- Paragliding over Neuschwanstein Castle in Germany
- Dog-sledding with Iditarod Jr. Champion on Glacier in Alaska.
- Hang-gliding in Brazil
- Bungee Jumping in Austria
- Sky-diving in the US
- Riding my motorcycle across the USA

Former Salsa dancing instructor and team member of Salsa Salvaje in Seattle, a competitive salsa dancing team.
I also give lectures at local universities on Marketing and New Product Development.