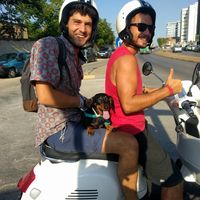 Hola! I'm Leo, an enthusiastic, friendly and easy going guy from Bologna, currently living in Finland to study.
I did my BSc in computer engineering in the crazy student city of Bologna, enjoying 2 Erasmus: one in Lithuania and the second in Canary Islands (Spain). Now I'm enrolled in a double degree master in Finland and Sweden.

I've started travelling all over the Europe since when I was a kid with my parents and once I turned my 18s I started visiting the world by my own.

Always looking for inspiration from people.

*30 August - I moved to Kaunas, LT to start my Erasmus 🇱🇹

2-26 September - From Montana to Illinois by van 🇺🇸

🏽‍♂️
1-5 March - Backpacking by hitchhiking in Tenerife during carnival 🇮🇨

17-28 November - From London to Bologna by bus 🇬🇧🇧🇪🇳🇱🇩🇪

🏻‍♂️
**Lockdown**
June/July - Nomading in Sardinia in exchange of photos

https://www.instagram.com/leonardorignanese/ - DO NOT TEXT ME HERE!

I'm an enthusiast user of Telegram, hit me up at https://telegram.me/rignaneseleo

Couchsurfing is the example of how the Internet can be really used for connecting people and create value in the world.

Give me nice people, a beautiful sunset and then a sky full of stars and I'm the happiest person in the world

- All but in particular Rock/Indie Rock (MGMT, M83, Red Hot Chili Peppers, The Strokes, Tash Sultana)
- I like to party with electro/techno/jungle music

Why only one? I have many!

- I collected some friends and took a 5€ last-minute flight to Ibiza the day of my 21th birthday to celebrate it. #CrazyAdventures

- I traveled for a month in the USA by a van with 2 crazy guys, living in a trailer, working for bed and board! Imagine your life without anything, with just water and a stove to cook. We had hard wild life camping: waking up in the forests, swimming in rivers, having deep conversations around a bonfire and other 1000 things I'll never forget!

- I had a yummy lunch at the Couchsurfing headquarter in SF with part of the team!

️
I'm ready to show you how to cook great meals!

My energy, my ideas, my kitchen skills or my travel hacks.
I'm happy to share my thoughts or previous experiences from visiting countries all over the world.