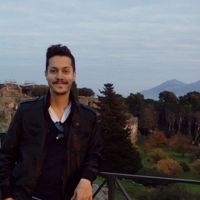 I'm a fun laid back and easy going guy with a sense of humour. I work a lot during the day and most evenings but if I can I can offer a couch. I'm a regular at the Couchsurfing Naples meetups.

I host people on CS usually to go out for drinks but during August and September I am more available for hosting.

I've been here for around 7 years but have been out of it for a while.

Sports Commentator on Radio and TV
Lived in 5 different countries in less than a year.

Going out for drinks is also another option.