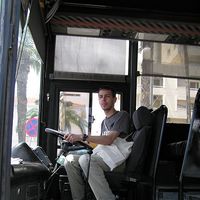 sort out my whole life, it seems

Okay, now instead of reading this section, better read the references below. Some people have had more flattering things to say about me than I do :--)
* * *
I pose as smart and unusual. I'm selective about who to make friends with. I blab lots and, unless I stop myself, can blab people out of sanity (consider yourself warned). I'm clumsy in everyday life. I'm pretty much the opposite of 'tough' but do talk tough sometimes because it feels good to voice a 'tough' opinion. I'm deluded thinking I'm not deluded by stuff many other people are deluded by. Whoever thinks I'm a conceited smartass, I'm not proving them wrong. When I start getting defensive, I better stop myself soon.

I'm very strictly against alcohol and all kinds of drugs, and I don't do clubs or any other kinds of 'nightlife'. I 'party' in a different way ;--)

Seriously, better talk to me in person.

I recommend CS to people all the time. Seems like more and more already know about it, though.

Since 2006, I've surfed CS users' couches in Serbia, Finland, Latvia, Moldavia, Russia, Malaysia, Indonesia, Singapore, Thailand, Laos, China, Mongolia, Ukraine, Hong Kong, Germany, Mauritius, and South Korea, and it worked out bloody marvelous. Beyond that, I have sizable experience in hosting people and being hosted in various places since as early as 2001.

For stats: I also tried couch-surfing in Greece (as early as in 2006) and Bahrain (as late as in 2020), plus some others in between, and failed miserably!

Language both as a tool for communication and as a standalone, aesthetically significant entity. Some more.

That make me feel I've been pwned, in want of a better term.

True story, folks. Got nabbed with a buddy by police in a disrepair-stricken historic building opposite the Kremlin wall (after climbing the building's roof and dome), was accused of intending to assassinate Putin and then bribed myself and buddy out with the equivalent of five US dollars. At large since then.

At your service as a native informant, Sovietology and Kremlinology enthusiasts :--)