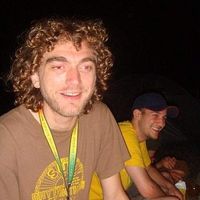 hmm, do this, have a cup of tea

I'm just finished a Masters in translation at Leeds, now,off for a journey. Hopefully I'd like to be a freelance translator and be free to travel around, with that paying my way in the process. I'm looking forward to going to New York and Colombia in September. I can speak Italian and want to learn Spanish too. I like things and people who make me laugh. I try to repay the favour. I'm really enthusiastic about having/doing some couchsurfing although my profile writing skills may leave a lot to be desired...writing seriously about myself feels rather strange...

Look at my dog and smile like he smiles. Remember to brush teeth when I smell how he smells.

6 months in my flat in Malaga have seen a pretty much constant in-out of people from all over the world. It's been great fun! Also the groups here in Malaga are brilliant for events, plenty of great memories from various CS organised events!

Learning languages, hopefully by osmosis. I like the fact that something I have really enjoyed doing has enabled me to communicate with more people than I could have before.
Music - Reggae on top there, a bit of hip-hop to follow, and a big jumble of everything else to follow on from there
Friends, laughing with them. Maybe this should go top, plenty of friends who I don't see enough of make me very happy indeed.
Trips - as much as I can afford or have the time off for, and I like to combine travelling with a bit of improvement in my language skills if at all possible.

I like friends, new and old, friendly people, anything which would make most people smile.

I am reading The Stone Raft by Jose Saramago at the moment which I really am enjoying. Italo Calvino, Antonio Tabucchi, The Kite Runner is a mover.

Music got mangled in with interests, how dare it.

Films - The film I most recently saw in the cinema was Dogtooth. Definitely made an impression, I think I liked it, eventually.

Before, The Big Lebowski, Burn After Reading, La Haine, Gomorrah.

Once, I was making some toast. I left the toast to its own devices, sitting in the toaster. The next thing I knew, the toast had popped up. One piece of toast had jumped over the other piece of toast and landed perfectly in the same slot- the toast(s) were united. Words don't do it justice.

I could teach you some Italian. Unless you're Italian. Then you could probably teach me some more.