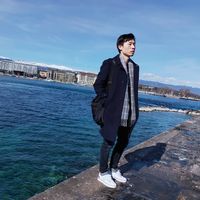 Dear whoever reads my references,

I need to make a clarification about the latest slander reference that I received from a host in Warsaw. It was my first uncomfortable couchsurfing experience. I refuted his reference on my reference page, but there was a word limit, so I could not explain the whole story there. I have already reported his slander against me to couchsurfing and am waiting for the response. In the meantime, I have to use my "About Me" column to defend myself since I don't want to be falsely accused of anything that I never did. To prove what I state below is true, I uploaded onto my "couch photos" album the screenshots of my conversation with this guy on CS and on messenger.

After I arrived in his apartment, it was very obvious that he was very interested in me. And at the first night, he started to play a gay-theme movie on his laptop and asked me to sit in his bed and join him watching it. I said I was tired and wanted to sleep. The volume of the moive kept disturbing me from falling asleep, so I kindly asked him to put on a headphone to watch that movie. Thank god he did. But I was still feeling insecure and could not fall asleep. A while later I felt cold and kindly asked him for one more blanket. He was kind enough to give me one more, but at the moment when he was passing me the blanket, he touched me and tried to molest me. I dodged and refused him saying I needed to sleep. Thank god, he did not continue. However, I felt very insecure and I did not sleep well at all. I wanted to leave, but it was not easy to find an affordable airbnb in such a short time. So I suffered two nights in his house though he did not try to molest me again at the second night. My flight back to Milan was at night on 15th, but I left his place the first thing early in the morning.

After I left his house, I just wanted to forget about him and did not even bother giving him a reference. To my surprise, he made up a story and slandered me in the reference he wrote for me. He is the one who harrassed me and tried to molest me. How could he slander me first? After seeing the reference he wrote, I was so angry! But I could only make a personal reference on his CS page trying to clarify the story since I missed the deadline of giving him a reference. You can see that personal reference that I gave him.

-----
I am a PhD student studying in Milan. I am a foodie and a travelling lover. I like fruit very much, especially blueberries! I like exloring the world and meeting new friends!

I am really sorry that I can not host currently simply because I live in the university dormitory which does not allow us to host anyone overnight.

can not recall right now. Maybe too many.
Eat a lot of blueberries one time :)

I can teach Chinese, share with you my personal experiences.