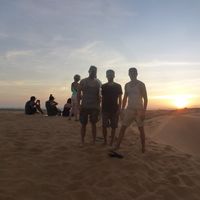 My name is Tarik, I'm 23 years old and I live in Hong Kong, where I also study for one semester. Normally I'm living in Austria where my home university is. I would say that I'm a friendly, open-minded, helpfull and tolerant person. I like to travel, meet friends and do sports.

When I travelled in the past, I was travelling around the country without knowing someone from there... Now I want to try Couchsurfing and meet local people... During my trips I met really interesting and inspiring people from which I learned a lot about life- i hope I will meet a lot more... Also I want to give the present of hospitality from my Hosts in future to my guests...

During a trip in South-East-Asia I met two girls from Spain in Thailand. After time I traveled to a small village in Laos where I met them a second time. Without exchanging numbers or other things I met them again in the capital from Vietnam, Hanoi. After a while I wanted to stay in a guesthouse in the middle of Vietnam, because a friend of mine was already there, but the problem was that there was only one bed free in a room which I had to share. I accepted it and I went up to the room. When I entered the room nobody was inside. After a while when I was unpacking my things from my bag the door opened and the two spanish girls started to scream when the saw me. Althoug it was already really unbelievable, this time I wasn't able to believe this any longer... the same room!?!? After this we exchanged the facebooknames and I travelled further. Two weeks later I was runing throug Phnom Phen because I had to get my bus when I met them the fourth and last time...

Experience/stories of my trips, the life in Austria, time and a lot of other things...