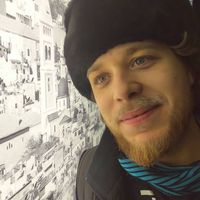 Where to begin. I'm a computer programmer by day and a housing justice organiser by night. Currently live out in East York.

Beyond that I find many ways to entertain myself. I read fairly vociferously with a mixture of both literary fiction as well as non fiction and I try my best to stay active, whether it be through cycling, hiking, ultimate or curling (which... is... perhaps not the best work out). In addition I try to make it out to the theatre and symphony.

I feel like if I prattle on about what I do, I might get no closer to explaining who I am. I think what is worth saying though is that I see my self as someone with an insatiable curiosity and a determination to apply themselves toward the project of making the world a better place. I seek to learn from those around me and if possible share a little bit of myself in return.

PS. If you're into transit or urbanism.... I can and will show you the best Toronto has to offer.

Why I surf: I love being able to visit a place and not just see the place and the built environment but also get a chance to meet the people who live there and get to know, at least some small part, of the human landscape that gives a place its real vibrancy

Why I host: I get to meet cool people from around the world and get the chance to show them the vibrancy and vitality of my own city.

As for books... The best book I ever read has to be "The Power Broker: Robert Moses and the Fall of New York" but I read an assortment of nonfiction, shortfiction and literary fiction.

I once brewed a honey lager that was probably 15% ABV and got everyone in my housing coop smashed at the year end semi-formal.

I've done a couple 800km cycle tours. One around the Bruce Peninsula (Ontario), another around the Haute Laurentides (Québec).

I got published in the Globe and Mail on my first try.

I can teach you how to make bagels and bomb-ass black bean burritos.

I can show you cool transit and urbanist things in Toronto.

I can make you yummy plant based meals and desserts as well as bring a bottle of beer or wine to enjoy over conversation.