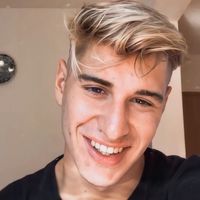 ''Rebellious dreamer with a Peter Pan like personality and enthusiasm of Home Alone (the movie) guy'' is one of the most accurate labels I've ever gotten. Hey, it's me, Romano, the adventurous, energetic guy coming from the sunniest spot in Europe, island of Hvar. Having grown up on the island, it played a huge role in shaping me who I am today. It all boils down to a love of boating, fishing, swimming and other people being way too involved in your life, especially when you're not doing things certain, traditional way, as not going straight from high school to college, but rather taking a gap year to figure some things out, as i think there's no better way to do so than travelling. My friends say I'm outgoing, open-minded, optimistic, sometimes way too adventurous, ''crazy'' and talkative. I suppose they're right, you tell me once we get to meet. If I would have to list some of my hobbies, photography, videography and swimming would make the list for sure. When it comes to food, I ain't that picky, I like all kinds of food, but my favourite cuisine must be mediterranean.
Oh, and one time Taylor Swift invited me over to her house and the other time... I was Owen Wilson's double for a movie.

Travelling is my huge passion and I think that there's really nothing more authentic than an actual local taking you around the town to all of his favourite places while telling you the stories you cannot find on the internet or the ones you won't hear from your guide.

I'm really not that into reading books, not a huge fan of the movies either, but I like to watch some ocassionally especially if it's Home Alone or Mamma Mia.

When it comes to TV shows, my favourite without a doubt is ''Friends''.

I listen to a variety of music genres, but mostly electro, house, techno and pop music.
(Avicii, ABBA, Kygo, OneRepublic, Taylor Swift, Coldplay, The Chainsmokers, Meduza are some of my faves.)

BUILT A SCHOOL IN TANZANIA
When I bought a one-way ticket to Tanzania a week before departure, went with no plan at all cause I really had no time to plan, I just wanted to leave because I wanted to escape the European lockdown, and then... I spent the whole year there volunteering. I was teaching English and started the fundraising with no expectations at all, but eventually, with the help of kind people I raised enough to BUILD A NEW SCHOOL in Arusha. Once it was built, a year later, i returned back home.

USA ROADTRIP
Having made few friends along the way, we all decided to rent a campervan and go on a road trip around USA. for a few months. We also made it to Hawaii where we did ''stairway to heaven''. Later on to Alaska as it's been a dream of ours and ultimately to NYC where we spent Christmas and New Year at Times Square (kinda cliche, right?)

INTERRAIL
Having returned from USA, I was lucky enough to win a free interrail pass and travel around Europe for the next 2 months.

WILD-CAMPED ALONG AND HITCHIKED ALL OF THE RING ROAD. ICELAND
Back in October, 2022 me and my cousin Anja decided to do the ring road on a budget. Hitchiking along while sleeping in a tent trying to catch a glimpse of northern lights. Long story short, we not only survived the freezing cold but made it in one piece and saw the polar lights.

HITCHIKING/WILD CAMPING ALONG CROATIAN COAST BACK IN 2020
When Covid hit, there was nowhere to go to, so I decided to explore my own country on a budget.

I could teach you the basics of Croatian language, how to pilot a boat or even how to swim in case you don't know. I'm keen to learn about any and all other cultures.

A place to stay at.