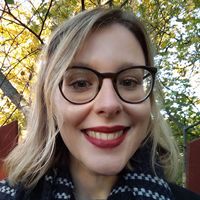 Living in Cáceres Spain, be sure to write me a message, I would love to get back to Couchsurfing as much as possible!

Originally I am from the Netherlands, but I come from the Southern border area which makes me feel more European than Dutch. :) In 2018 I finished with my master in German literature/linguistics/philosophy, which I did at the universities of Mainz (Germany) and Dijon (France).

I am not on Facebook, Instagram, Snapchat and Twitter and I believe I still exist as a person and am still perceived as such by other people. :) :) :)

Some more things about me and my interests: I am always doing something related to languages, read a lot, I like to take a lot of time to cook and eat even if it's just for myself, listen to all kinds of music, watch series (I'm afraid I get addicted to it from time to time especially reality shows....), try to spend as much time with my family and lovely friends, I like discussions about politics, I sometimes work as a tutor in Dutch, German, English, French and Latin and try to understand Europe and the idea of "countries" - which I obviously like to do by traveling the continent (and beyond if I am lucky enough) :)

I LOVE Couchsurfing. I have had the most amazing experiences with it, more than I could have ever expected from it. It has allowed me to put my life in perspective in the best way.

I discovered the CS meetings and events in Amsterdam quite late (stupid because they are so much fun!) and I met some very cool people there aswell.

I've organised CS meetings in Mainz when I was living and studying there, which actually is an amazing way to be active in the CS community :D Anddd the CS life in Dijon was very alive which I enjoyed very much
+ me and my sisters did a CS free walking tour + CS meeting in Milano which we thought was legendary! :D

My travelling aspirations for now (other than continue to travel in Europe) are to go to Iran and make a REALLY big Russia-trip at some point.

I also have a lot of very cringy guilty pleasures when it comes to music, I'll share this with you when we meet mhihi

I am really quite ignorant about cinema so you are welcome to enlighten me!

Meeting so many amazing people from all over the world!

Traveling through Europe by train has been one of the most amazing experiences for me so far. When it's done with friends it's of course even so much better. I hope I'll be as lucky to have many more of those trips.

I translated a book about Russia from German into Dutch

Everything you'll want to teach me I will most probably find interesting! I really like to learn new things about cooking so let's make a nice meal together :) I got better at cooking in the last couple of years so there might be some things I could teach you about that too.

I hope we can share a nice time together and experience the feeling of how amazing it can be to meet random people and have a great time with them!