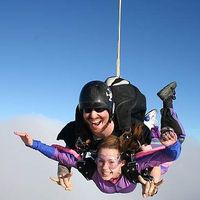 Enjoy life. Get more of my musical endeavours released.

I am college educated (history/psych double major), an avid skydiver (tandem and AFF instructor, plus fun jumper), BASE jumper, rock climber, learning to cook well, and trying to involve myself in as many forms of musical expression as possible.

I try to live a clean life (vegan and drug/alcohol free), but I am not preachy because it is a choice that I made about my life.

Currently I am moving around the US (hopefully the world, soon), taking in new places and seeing what the people there are like. The Houston, TX area is my current haunt.

I'm basically always looking for something new to try and learn about in order to improve myself and the world, by extension.

I don't have much time on earth, so I might as well do all of the fun things that I've considered. You could die tomorrow.

I have surfed a few couches, showed someone around the town that I was living in in NorCal.

Friends in Quebec and Toronto have put me up. Others have set me up all over the US. Back in 2007 I surfed a couch of a great person in Iceland thanks to this website. In 2008 this wonderful site allowed me to crash for a night with an amazing lady in Krueng Thep, Thailand. If it is not covered in glass or nails, I can curl up and pass out on it.

Music, movies, skydiving and learning are big interests of mine. Let us also not forget eating tasty vegan food.

Books: Anything Douglas Adams, Chuck Palaniuk, The Descent by Jeff Long, This is your Brain on Music and most non-fiction stuff, too.

Jumped through the steel girders of a bridge at 0100 and watch as the it rushed past me and then deployed a parachute to save my life. Went skydiving over Iceland. Seen lightning while in freefall. That is more than one; I am not good at following orders, I guess.

I am now a vertical wind tunnel instructor and teach people how to fly their bodies in a simulation freefall environment. It is not just that, but it opens people's minds to explore and live life just a little bit more.

I try to learn anything that I can, but still have a special love for psychology after getting a degree in it. Going to start on learning ASL soon.

I can show folks around Houston a little, can try to get them flying, show them tasty (vegan) food in Houston. And stories, as many stories as they will sit still for, but only if they promise to reciprocate.