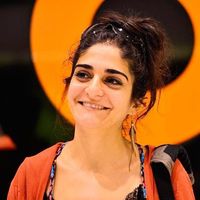 I studied Film (direction of documentary) and before that Social Anthropology.
Film Studies were in Cuba, for 3 years; graduated in 2015 and after that I had been travelling...
By that time, feeling much a nomadic spirit ... and my base is in Costa Rica.
After pandemic arrived, I decided to stay in Costa Rica and started to live in a land surronded by nature, started to grow and also adopted a cat! (Called pishi) the project is called Finca la Luna. Was created, with the vision to create a beautiful place where anyone who gets to know it feels uplifted and connect to his/her heart. Sounds of the river from far away, sounds of nature and birds all around... A place to retreate to your inner-self.

Iranian filmmaker based in Costa Rica feeling more like a world citizen...
A storyteller with no borders.

I believe we live in an interconnected world with invisible bonds .. beyond our imagination!

I always loved getting to know new people... being able to trust people and be trusted I think it's very nice and appreciated. Knowing that people can feel, they are all part of a community (human family) and they can collaborate to each other.

I love being surronded by the nature...
And I want to enjoy life from its simplest beauties ..

Movies: It's hard for me creating "favorite" films!
But well ... Among the films which are more 'known' some films I enjoyed watching:
Life is beautiful / dancer in the dark / memento / Hotel Budapest / The Separation.

Among the ones 'less known': Bela Taar's films among so many other. ..

Little things that have amazed me, that for me have been like little miracles.
such as:
One time that I was filming the texture of a sacred tree in an indigenous community, and suddenly in the middle of the shot a hummingbird appears!

I can teach Farsi (if someone by any chance would be interested at!)
I would love to learn any new thing, I believe every single knowledge somehow is good...
I can share about cinema (iranian cinema or documentary filmmaking)
And about persian poetry... about persian culture if you are interested at getting to know..
Or sharing stories/experiences of the journeys.. or the places where I have lived in.
I can play chess with you if you would like to have a challenge!

(all that it is mentioned in teach/learn/share section above!)