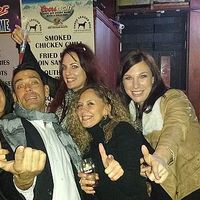 Born an raised in NOLA , Currently renting out a loft in the French Quarter , an residing in Gentilly " off of Elysian Feilds * ".. I WORK as a Techinician Locally , and currently making films in New Orleans . especially since we wont have this town around in a couple last years . *( WEATHER Permitting ) LOL * . and I tried to be a stand up comedian , *( BUT IM not FUNNY ) * So I made a sitcom called " BELOW SEA LEVEL.TVhttp://www.youtube.com/watch?list=PLB10414E5D7049488&amp;feature=player_detailpage&amp;v=lXCqi8-E-zo" Check it out. SO Im hoping to make some friends an see where the surfs up * *! !

HOW I PARTICIPATE IN COUCHSURFING
Socializimg With YOGIS , meditators , HOLLISTIC Communities from around the world .

I beleive in helping others , that I will be helped the same way . AND making new friends an adventures is the WAY of the SURFS up * . NO Philosophy here * . But HAVING friends an making new Friends is what lifes all about *
My ROOMMATE IS A Tour guide available for touring the FRENCH Quarter is best.*

Making this world a better place , by riding the wave , an being inspired &gt;*

" Below Sea Level .TV " I made about living in the FRENCh Quarter after Hurricane devastations *
How to Talk to Beautiful People - Book I am writing *
Thievery Corporation _ MUSIC , that inspires me , since we all steal ? share the rythm of life

CHECK out some of the films stuff I do , I figured its easier to see then from Explaining . It all started after our Hurricane in 2005 KATRINA , an I was working for NBC Universal filming everything among the Devastation , an then rebuilding . an now trying to inspire others to do the same , an check out Below sea Level .tv or My latest video FALLING * http://vimeo.com/71772386 AN check me out on Face Book under Roy Farthing

Inspirational people , that make this world that type of place *