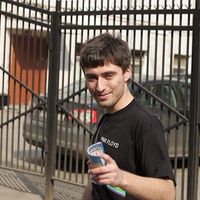 Stop the Attack of the Killer Tomatoes

want to live and bring joy 'cause i'm destined for success=)

Ok, after i've been registered here for year and a half(since august 2008 when i found about CS during my first visit to Saint-Petersburg and first surfing experience after metallica concert:) i think it's high time to write something here....
like what the hell i was doing all this time, i mean useful stuff for this great idea....

1st important thing which comes to my mind is spreading the word to my friends and acquaintance and just people i meet.

I organized some activities like Work For Food sessions at my place http://picasaweb.google.com/rr602u/WorkForFoodSessions#, i wanted my doors painted so i suggested to cook for those who will paint them=) The whole concept turned out to be a success, good way to socialize and exercise your talent(cooking or painting) or learn either of those.

And after being tiered of just drinking and remembering about healthy lifestyle i helped in organizing some sports activities, so now we have weekly Moscow CS volleyball games on weekend=) UPD: we had this games but now we stopped..

Yeah, i have to admit that i'm quite lazy to write something here about CS experience i can say that that was pretty like jimmy hendrix experience;) the rest you can read in my preferences

let it be the last things which impressed me:

woke up this morning

may be how to cook borsch?