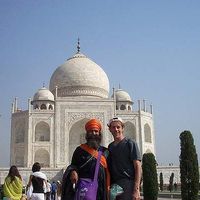 PASSIONS: There are three things about which I am most passionate...

Teaching: I have taught in universities, professional conferences, and small villages in third world countries to both adults and to children (mainly math, science, and technology). My belief is that a person really never knows a topic in depth until he or she has taught it. Students will challenge the teacher to think differently about a subject when it is taught well. There is nothing more rewarding than seeing the "light go on" when a student comprehends an important concept.

Music: I believe that music is a means of communication that transcends all cultural barriers. Music can communicate joy, sorrow, stories of courage, political messages, and just about everything that one can express with feelings of passion. My mother was a professional musician (classical cellist) and I was a DJ for 15+ years in my days of being a student (which lasted a very long time...). My musical tastes are as diverse as they are obscure. I listen to music of all kinds and from all nationalities. Live music performances are even better!

Travel: One must explore to experience this world. I love nature and the outdoors. I am passionate about art of all kinds (music, painting, sculpture, architecture) and am constantly seeking out the diversity of its many forms that exist on our globe. People, culture, food, history, and architecture are all part and parcel to a fulfilling travel experience. Would you like to be happy...I would recommend to buy less stuff and travel more!

1. Wealth without work
2. Pleasure without conscience
3. Knowledge without character
4. Commerce without morality
5. Science without humanity
6. Worship without sacrifice
7. Politics without principle

"Travel is fatal to prejudice, bigotry, and narrow-mindedness, and many of our people need it sorely on these accounts. Broad, wholesome, charitable views of men and things cannot be acquired by vegetating in one little corner of the earth all one's lifetime."

-Mark Twain, The Innocents Abroad/Roughing It

"Your heart is free. Have the courage to follow it"
-Malcolm Wallace

I surf whenever I can when I am traveling and if I am not arriving too late at night. I love the couchsurfing culture of sharing and experiencing with others. Strangers are simply friends that you have not yet met!

As a student I was a member of an international student association (AIESEC) and my dorm room was the Boston couch surfers crashing pad of choice for members of this club. Fellow students on my floor joked that I was running a free youth hostel out of my dorm room. I still have ongoing contact and friendships with many of those couch surfers from 25+ years ago!

Any and all new experiences!

Random selection of authors from my book shelf:

I have an exremely diverse taste in music. I will listen to basically everything that is unique and passionate. Here is a random sample (not exhaustive) of what you might find on my ipod on any given day:

Gave up a traditional lifestyle in favor of traveling the world, meeting people, and sharing experiences. Have met many friends for life that would not have been possible in any other way. Have spent time traveling and working in 150+ countries enjoying the diveristy of people, nature, food, culture, religion, and architecture that this world of ours has to offer. Have visited all fifty states and every national park in the USA.

Smiles, conversation, stories from all over the world, travel planning tips in 150+ countries, a good game of chess, practice with English language...the list goes on!