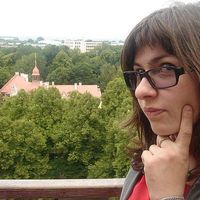 Because I like the idea of welcoming and meeting strangers in your home and traveling in this way myself. I have met many nice people via this website. Because welcoming strangers at my place and meeting them all over the place is cool!

I was hosted one night in Paris, I hosted Kamila and her friends in my sister`s flat in Vilnius, went to a couple of meetings. there was a great one in London, where surfed Attila`s and Amadine`s couch for two days. I also met Joanna in Bradford for a drink, went to a language exchange meeting in an abandoned club in Bradford and had a lot of fun there. I also met Naomi, a Swiss couchsurfer during a yellow tour around the beautiful Vilnius. You`ll never know where you gonna meet a couchsurfer, they are so spread everywhere. Met a German CSer in France, met some guys in Cambridge and London and was hosted at Eva`s place in Dublin (it was awesome). I have met two Daniels, Ray C, Abby, Gabriel, Anna, Justyn (a very cool guy), Paulius, Mark and Jamie in Cambridge. Hosted Fulvia, Sara, Elisa, Sean, Andras and Subhartra at my place. Surfed Neil`s place in Glasgow and Aloe`s place in Edinburgh. I was hosted by Aljosa in Skofja Loka for 4 days, then Anna hosted me at her and Dejan's place for two days and we traveled together all the way to Croatia. We met Jaja in Zadar and surfed Pascals place where we met Michele and we all traveled to Mostar and Sarajevo together. Nagy hosted me and Anna in Sarajevo for two days and I met Fatih in Sarajevo. Igor hosted me, Justina and David in his place in Banja Luka. I hosted Claudia from Granada for a week in my room in Bradford. I`ve stayed at Fernando`s place for a few sunny days in Porto. Enjoyed staying at Indrek`s place for a few days in Tallinn. Surfed Kim's place with Egle in Edinburgh.Hosted Anita at my place in Vilnius and sat on the grass with her, and my friends listening to Claudio talking about diets. Hosted Ben for a few hours on the floor in my room before his flight to Georgia. Hosted a few people in my flat in Vilnius.

A beautiful night in Paris with Xavier and Ikoo. A film and a short tour in Bradford with Azam. A house party in Shipley. I also went to some cultural events during the night when the whole town didn`t sleep with several CSers from Vilnius group, met some CSers in the Bjork`s concert in Vilnius, attended some CS meetings in Vilnius and hosted some nice Polish people in my place in Vilnius, met Pauline in National Media museum in Bradford, went to London CS meeting, surfed Amadine`s and Attila`s couch for two beautiful days. Met Joanna for a drink in Bradford, went to language exchange meeting in Bradford. And see above

I enjoy traveling in Lithuania and abroad, listening to music (mainly indie or singing poetry because I like the lyrics), I enjoy hiking and walked 300 km on the Camino Frances in Spain. I attended modern dance classes for 1.5 years and really enjoyed it. I am also passively learning Spanish and Russian. I hope to finally dare not only read books written by other authors but to give birth to a book myself. I like spending time with people, walking, talking, having dinner and drinks.

Did the things that I've been determined to do despite my fear and scepticism of other people, listening to my heart or to my inner grandma.

I can teach English, Lithuanian, some Spanish.
I am open to learning about new cultures, traditions, books, music, dance etc.
I can share my flat, food and time with you.