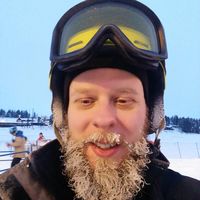 Somebody told me that the more references you have, the shorter the profile text should be. So it's becoming quite short at this point 🙂

Music: Metalhead first and foremost but all kinds of other stuff works too and if it's live and not 100% pop, I'll probably like it. If there's a great drummer, I'll probably love it. And also annoy everyone by talking about how great the drummer is.
Movies: Let's just say that my home theater projector has a lot of hours on it. :) Bad movies, sometimes even good movies. I'm sure I watch more documentaries than the average person.
TV: I binge watch way too much stuff these days to list anything here either. Thought I will say this: The Wire is the best show ever and Sir David Attenborough is the best person ever.
Books: Mostly scifi/fantasy and nonfiction.

I have approximate knowledge of many things... Including what there is to see and do here in Jyväskylä.

The e-drumkit might catch your eye when entering my lair. I'm such a nontechnical drummer that I'd hesitate to use the word "teach" regarding drums, but I could show some basics :)