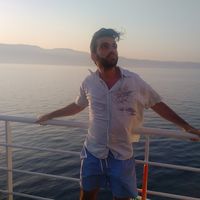 Hi everyone ! I'm Sam from Strasbourg, born and raised, even though having persian origins from both my parents, i used to spend every summer since childhood there with all my family, so to be correct i would say i grew up between France and Iran.
I would have loved to share with you my hometown : its European Parliament, its old narrow streets and wide green spaces, its nice bars and clubs to chill at nighttime and many landscapes all around to visit in daylight.
But currently, i am living and working in Paris, which is not bad either !
It's already been 2 years now, and last one i bought my place where everything had to be redone, from the floor to the ceiling, and i spent this whole summer 2017 working on it.

Now that i'm proud of the result, i hope to welcome many of you from all over the world, and maybe one day come visit, who knows ?

As written above, to meet people from all over the world, learn about their culture and share mine while hosting them. For me, it's a way to travel without having to fly !

During Football Word Cup 2014, i was at Copacabana Beach in Rio de Janeiro, standing in the front row of the Fifa Fan Fest, where the game between Brazil and Chile was broadcasted on the giant screen.
The hosts won after penalty shootouts, and the joy i witnessed there was a once-in-a-lifetime experience !

I would love to share my culture, both french and persian if asked, answer about how it is living as a young man in France or in Iran. But i am more willing to learn about my hosts and their country, discover places i wouldn't know otherwise, if not thanks to them, and eat real local food. This is what travelling is all about !